A youth cooperative makes its mark on the rice value chain in Bagré, Burkina Faso

A youth cooperative makes its mark on the rice value chain in Bagré, Burkina Faso

in News
This news is part of the following focus areas:

"Today, thanks to the experience and training I have received, I am convinced that to succeed in marketing, you have to be part of a group. " Ousséni Welgo, 36 years old, president of the Mitiiri Cooperative in Bagré, one of the largest rice-producing communities in Burkina Faso.

The various training courses and support his cooperative has received from Rikolto have convinced Ousséni Welgo of the strength of working together.

The Mitiiri cooperative is an organisation led by a team of young, dynamic agricultural producers committed to professionalising their organisation, so that it can position itself as a reliable business partner with a good reputation in the Centre-East region of Burkina Faso.

In December 2018, the Mitiiri cooperative was one of the first in the commune of Bagré to comply with the new legislation on cooperative societies and producer organisations, by becoming a Simplified Cooperative Society (SCOOPS). The members of the Mitiiri Management Committee say that this would not have been possible without Rikolto, who has been supporting rice producers' organisations in the Centre-East region since 2011, to professionalise their way of working. 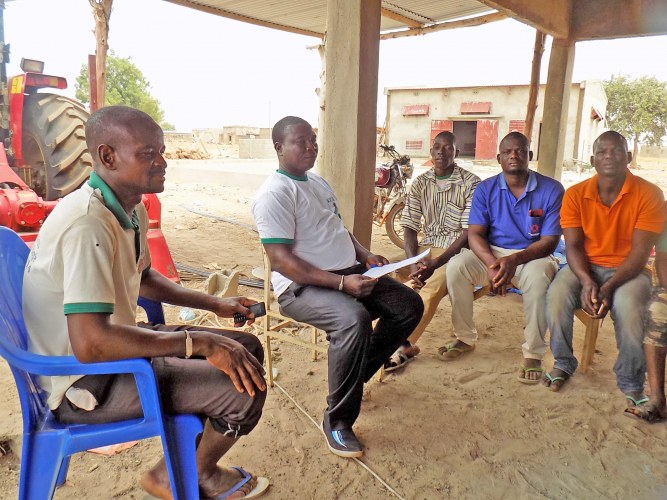 Members of the Management Board of the Mitiiri Cooperative

Producing the quality demanded by the market

The cooperative has enabled some of its 126 members, including 36 women, to take part in multiple training sessions organised by the Selling Quality Rice for a better income (QUALIRIZ) project.

Market access for small-scale producers is one of its specific objectives. "Rikolto's role in the QUALIRIZ project is to strengthen the relationship between producer organisations and processors in order to supply quality paddy to processing units. "says Moussa Ouedraogo, the QUALIRIZ Coordinator. To this end, the project's experts are organising training sessions, some of which are on Contract Farming.

"Rikolto taught us that we should produce varieties that buyers like. In addition, we were able to experiment with the group sales techniques that we were taught, and thanks to this, the sales of our last harvest were profitable. "

The QUALIRIZ project also helped the cooperative's managers to establish formal business contracts with processors and specialised buyers in the region.

Being able to establish formal partnerships with processors

Thus, QUALIRIZ project experts put the Mitiiri Cooperative in touch with other actors in the rice value chain in Bagré. The cooperative's managers benefited from a series of training sessions on techniques and risks related to the marketing of agricultural products, including paddy. This also helped them to establish a formal partnership with a rice hulling company in the commune, Wendpayangda, headed by Mrs. Nafissa Yamba.

"My collaboration with the Mitiiri Cooperative is different from that with other cooperative. Mitiiri agrees to supply their rice to me on credit so that I can first husk the rice and then pay them back. I am satisfied with the trust that they have placed in me," says Mrs. Nafissa Yamba gratefully.

The Wendpayangda company respected the contract by paying the cooperative the fixed amount corresponding to the 46 tonnes of paddy it bought from the producers' organisation at the beginning of the season. The members of the cooperative confirmed their commitment to deliver 54 tons to the company, the remainder of the total volume of the contract, at the dry season harvest.

The funds from the sales of paddy allow the members of the cooperative to have a better income and also to carry out common works.

Having the support to become true agricultural entrepreneurs

The cooperative has been able to hire the services of an accountant. The exemplarity of its members and the fact that it has been able to grow its own funds reinforce its good reputation in the Centre-East region of Burkina Faso. And the dynamic members of the cooperative's management committee do not intend to stop there.

"The cooperative is now in need of guarantees to pay for other materials and even for the management of existing materials," says Ousséni Welgo, with the approval of members of the Management Committee.

"We wish that the collaboration continues. Rikolto has changed a lot of things for the better. We are who we are today thanks to their advice. We want Rikolto to accompany us in the creation of companies"