War of clones: Native cocoa breaks the mould in Pangoa

War of clones: Native cocoa breaks the mould in Pangoa

in News
High quality Peruvian cocoa for fine chocolates
This news is part of the following focus area:

For some years now, the Peruvian region of Junín has seen a revival of interest in native cocoa. Although ancestral communities such as the Asháninka, Nomatsiguenga and Kakínte domesticated the local crop and were the first to use it hundreds of years ago in San Martín de Pangoa, later, in this same area, productive initiatives introduced some varieties of cocoa as an alternative to the illicit coca economy.

In recent decades, this divided the producers into two: those who used and conserved the mountain or "fine aroma native" cocoa native to the area, and those who used the Trinitario hybrid or "introduced clone". Supporters of the Trinidadian hybrids praised its yield, but those who preferred the native cocoa highlighted its remarkable organoleptic qualities and its fruity, citrus and nutty notes, which were preferred by the fine chocolate industry.

The Pangoa cooperative is promoting the cultivation of "fine aroma native" cocoa because of the improved income it promises, and in view of the popularity of the "introduced clones" decided to fight fire with fire. So they have been working with a selection of the best native trees in the area to create their own "native cocoa clones". How is Pangoa's native cocoa winning the battle? We tell you about it in this article. 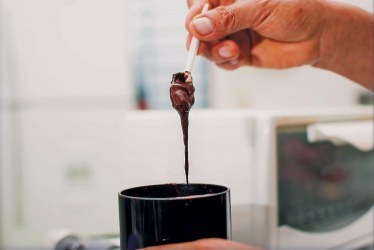 True to the native variety. In Pangoa the predominant crop is the cocoa native to the area. For its exceptional qualities, the chocolate derived from it has been given an award 4 times by the Academy of Chocolate Awards in London. 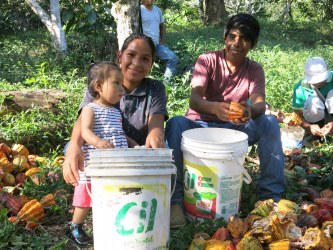 For decades, the area around the VRAEM has concentrated a dangerous mix of coca and drug trafficking in the country:. But today more and more producers are choosing cocoa as a profitable and sustainable alternative. 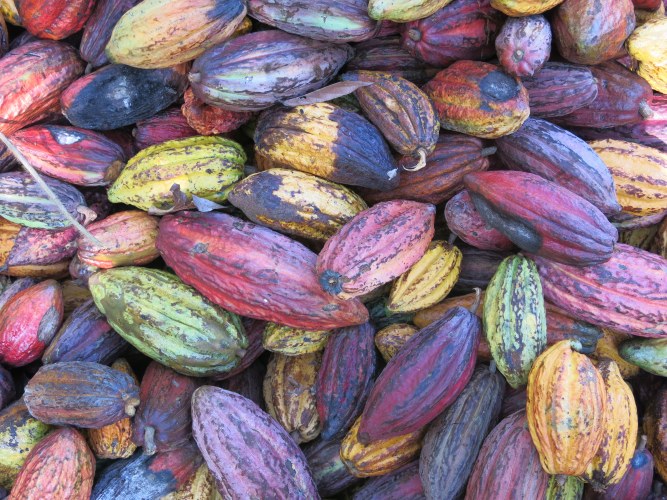 Most of the cocoa plantations in the central jungle are made of the CCN-51 variety because of its yield.

When talking about clones in Pangoa, nobody thinks of foreign (introduced) varieties any more, because the cooperative has found in genetic science an ally to conserve the best of the native cocoa and multiply it via grafting in clonal gardens. The Pangoa cooperative has been working with thirteen 'native clones' from the area, giving preference to these cocoa varieties over other introduced varieties such as CCN-51," says José Luis Arroyo, the cooperative's extension technician.

The clones to which José Luis refers are a selection of the best native cocoa trees in Pangoa: those in the area that are the most productive and with the best sweetness, aroma, colour, flavour, fragrance and resistance to pests.

Since their identification in 2018, the cooperative's so-called "elite trees" or "super trees" are part of a long-term plan that will benefit members from 2024 onwards, increasing access to a profitable crop that is an ally of conservation in the area.

The process of identifying 42 native trees and the final selection of 13, the propagation of varieties and the installation of clonal gardens in agroforestry systems was advised by Rikolto and co-financed by Pangoa and the Belgian cooperation.

Super trees: Success is in the genes... or diversification?

Marcelo Ramos, a member of the cocoa cooperative, owns the land where one of the first four clonal gardens in Pangoa was established. He describes how, alongside fine and flavour cocoa, he maintains a diversified production system that provides him with income. The varied product basket is sold at the local market and as food for the producers themselves.

For the cooperative, this collection of 13 promising trees (genotypes) is important because of the relationship between diversified systems and the goodness of cocoa in the area.

Pangoa and Rikolto have been working on this relationship between diversification, quality cocoa and the implementation of agroforestry models since 2017 to ensure and increase members' income. For Virgilio García, producer and taster, a chocolate made from native cocoa grown in agroforestry systems breaks the mould. From his laboratory in Pangoa, he explains.

The diversification of cocoa plots with fruit trees or timber forest (species) does have an influence on the taste. Cocoa already has basic flavours that are characteristic of each area, but diversifying has an impact on a broader, more varied and more complex flavour

Virgilio García Head of the chocolate plant at the Pangoa cooperative.

Growing in an agroforestry and diversified production system improves the organoleptic characteristics of the cocoa beans, as well as the resilience of the trees by allowing them to better adapt to the climatic conditions of the area.

This is how Pangoa cocoa, which has been growing under these conditions, has become more tolerant to pests that can affect up to 40% of production in the area.

This tolerance is an advantage for producers in a context of climate change, as it reduces the costs of cultivation. Therefore, in the short term, the cooperative plans to renew and rehabilitate unproductive plots with genetic material from the clonal gardens with elite trees.

Diversification and agroforestry systems for the present and future of Pangoa

Pangoa is an organisation with a coffee-growing tradition that has managed to carve out a path in the cocoa and chocolate business and to go further with a crop diversification strategy to guarantee its sustainability. Today 56% of the producers' income comes from cocoa and 44% of the families' annual income comes from the sale of fruit and vegetables, among other foodstuffs. Together with its associates, the cooperative manages 780 hectares of cocoa with organic certification, fair trade standards and in agroforestry systems.

By 2021, Pangoa expects to have installed 3,000 super cocoa trees with the best attributes of quality, flavour and resistance to the onslaught of climate change. By the sixth year of installation (2024), it is projected to produce more than 3,000 kg/ha per year, renew and rehabilitate 100 hectares with 70,000 grafts from the clonal gardens and selected super cocoa trees. The dream is that this will benefit the whole region. José Luis explains:

The impact on cocoa-producing families will be progressive. The families in the Junín region will have access to high-value genetic material to establish new sustainable and resilient cocoa plantations, ensuring productivity, profitability and quality

Pangoa went from generating 420 kg/ha annually in 2017 to 650 kg/ha in 2019, thanks to the implementation of good agricultural practices in agroforestry systems, as well as integrated pest management and organic cocoa nutrition.

This change has already meant a 54% increase in income and an improvement in the living conditions of the cooperative's member families, located in the Central Peruvian jungle, today one of the areas most affected by Covid-19.

The case of the Pangoa cooperative demonstrates that thanks to the agroforestry model in combination with genetic science it is possible to bet on biodiversity and sustainability by improving indicators of productivity, resilience and profitability for the cocoa business.

Meet the protagonists of the Pangoa case. Watch the video of the initiative: (in Spanish)

Based on this experience, Rikolto is currently promoting, together with members of the Regional Technical Committee of cocoa in Satipo, the selection of native cocoa trees to install clonal gardens in the province. This new initiative will help to recover the local genetic biodiversity and will inspire a model of action for other regions.