A tasty trip to discover the activities of Rikolto in Belgium

A tasty trip to discover the activities of Rikolto in Belgium

What do a smoothie on a home trainer, a bar of Nicaraguan chocolate, a seasonal vegetable challenge and a sandwich with seaweed pesto have to do with a food smart city? Everything, if you ask Michèle, Beate, Philippe, Hannelore and Marieke. They took us along for a trip through the heart of Leuven.

At the end of November, the international Board of Directors and the international Management Team of Rikolto gathered in Leuven. On their programme, besides a week of meetings, we organized an exploration of our projects in Belgium. And do take that literally: after the morning coffee we hit the road for a tour with four stops in Leuven, with a lot of (sustainable) food for thought. And sometimes for the stomach. “Inspiring, energizing and delicious”, is the conclusion at the end of the day.

The trend is unambiguous: on the long but necessary road towards a low-carbon society, cities increasingly play the leading role, thinking about how to become ‘climate neutral’. Not only do cities try to tackle complex challenges like energy and mobility, but also food. Today half of the global population lives in cities, soon it will be three quarters. Who will feed those hungry mouths? And how can cities keep the ecological footprint of all that food within the boundaries of our planet?

In 2015, during a meeting of 137 city mayors, the concept Food Smart Cities was born. Since then, different regional offices of Rikolto have contributed to the food strategies of Tegucigalpa (Honduras), Quito (Ecuador), Solo (Indonesia), Da Nang (Vietnam) and Arusha (Tanzania). In Belgium, we initiate and support projects in Bruges, Ghent, Antwerp and Leuven. 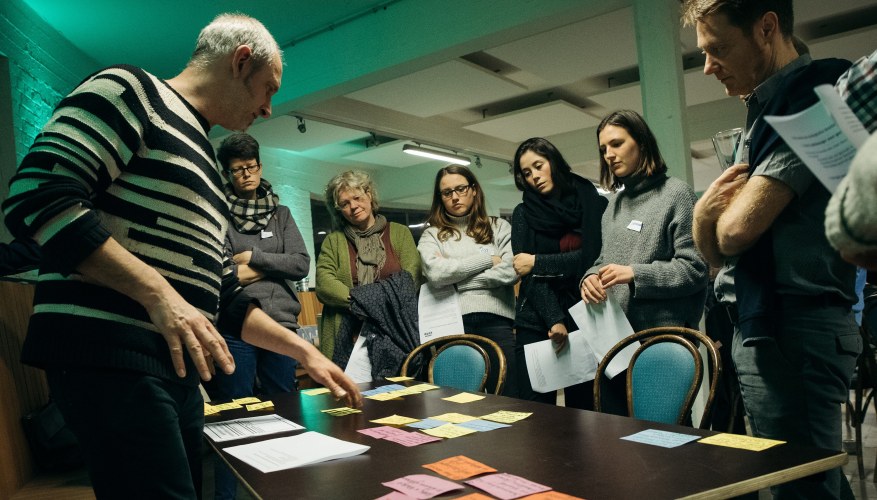 However, the questions remains how such a food smart city is organized? A crucial question for Rikolto in Belgium as well. Therefore, for our first stop, we go to the gothic town hall in Leuven. During the past year we were closely involved in the reflection process to turn Leuven into a food smart city. “Leuven has quite some short chain initiatives, packaging-free shops and projects to tackle the issue of food waste”, Michèle from Leuven 2030 tells us. “However, each one of those initiatives stand on their own. Therefore, we have elaborated on a strategy, together with pioneers and people from the city, the university, Belgian’s farmers union, companies and other organizations: to promote healthy and sustainably grown food, to support pilot projects, connect them and create an enabling environment for new initiatives. On the first of January, when the new city council starts, we will hopefully be able move up a gear.”

There is a lot of work to be done. This also counts for Rikolto, that will be involved even more closely in the project.

“Has the health aspect also been considered?”, council member Mark wants to know. “Because in many cities around the world, that is a strong argument to involve more citizens and organizations in such projects.”. “Sustainably grown food should have an important health component, the rationale is correct, and it is the University of Leuven, the City of Leuven and many other actors that will contribute their expertise in this field”, Michèle answers.

Entering a secondary school always brings along youthful memories. However, the fact that pupils can be in front of the class is quite new. Sixth-grader Beate is one of the driving forces behind Project D, the name used in the school for what in Rikolto language is called a School Food Lab. Enthusiastically, she told us how she rolled into the project by having a smoothie while on an exercise bike. And next, how she and her colleagues of Project D during the past school year organized a veggie lunch, visited farmers and set up a real food festival with food surpluses.

“I learned a lot”, Beate concludes. “For example, that you don’t have to be an animal rights activist to make the choice to eat less meat. There are more than enough environmental reasons. The catering company here at school changed a few small things, however it is impossible to serve a sustainable meal at the agreed price. That must change.”

So, there is work to be done for Rikolto: setting up more pilot projects, in order for schools to learn from one another. Really boost a school every now and then, like in the Technical Institute Heilige Familie in Bruges, where chef Seppe Nobels fired up the school cook to make sustainable choices. Especially sitting together with schools, local governments and other partners, so the contracts catering companies obtain will also contain sustainability criteria in the future. Or, why not, a Green Deal in which the Flemish government takes initiatives around the food policy of schools.

The bar is put high for Rikolto. However, first things first, it is time for lunch. Out of two wooden boxes, bread with hummus and seaweed pesto appear. 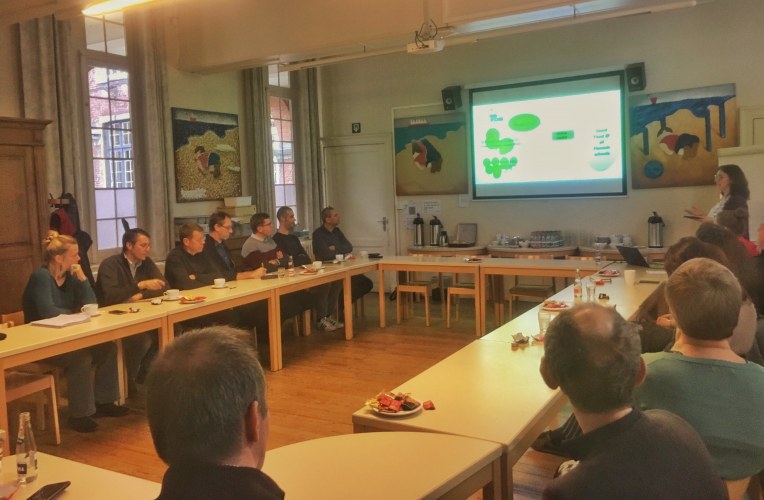 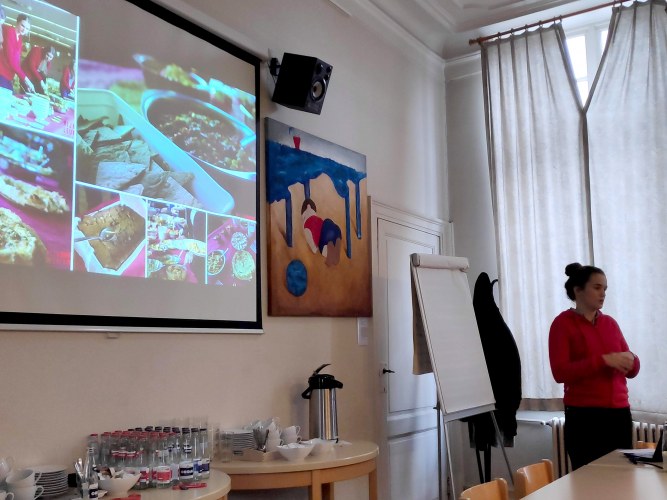 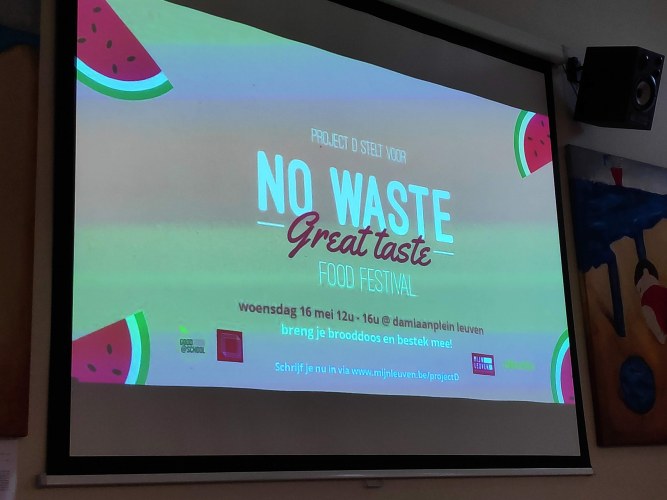 “Did this project change you?”, Stephanie asks Beate at the end. “Yes, it did”, she answered. “I will now discuss food with my parents and brother even more, and more passionately. Also for my study choice next year, I discovered careers I didn’t even know before."

Input from the global South at Colruyt supermarket

Before we step into the store, Philippe, Manager Sustainable Sourcing and our conversation partner within Colruyt Group, challenges us: “Look for the three products that made it to our shelves thanks to the cooperation with Rikolto.” It’s not as easy as we thought finding them between thousands of other products, but not much later we are proudly holding a packet of bio tricolored quinoa from Peru, a bar of chocolate from Nicaragua and a can of coffee from Kivu in DR Congo.

“Colruyt has prioritized around twenty product categories, for which we want to work on sustainability.”, Philippe tells us. “Usually we rely on labels and certificates for that, like MSC, Utz or sustainable palm oil. However, apart from that, we have the ambition to provide opportunities to farmers’ groups through at least 10 supply chain projects by 2020, and to have an important impact in the South. Usually we make a link to our own Collibri Foundation, through this we support educational projects.”. 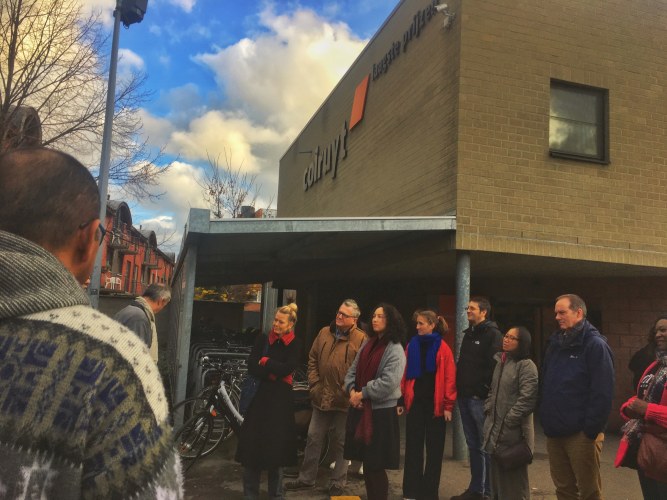 At Rikolto we already know that these processes can be quite a bumpy ride. The rice of our Beninese partner cooperatives has not been for sale anymore in Colruyt for a while now, and the long-expected bananas from Senegal are not yet found in our stores. Although this does not necessarily mean there’s a negative story behind it, especially not when the trajectory has helped farmers to find their way to the local market. Or when Colruyt’s local buyers have expanded their view through the contract.

Both Colruyt and Rikolto foresee a further collaboration. Bridge builder between farmers’ cooperatives and retailers… It’s a role that suits us.

“How do you deal with the issue of prices? Do you handle the ‘living income’ concept?“, Sharon wants to know from Philippe. “In consultation with the farmers and involvement of all chain actors, we strive for a fair price”, Philippe tells us. “There’s no direct link between the purchasing price and the selling price, which we always align with other supermarkets. If we have to reduce our margin, the decision is made at the board level”.

Those who think about the role of retailers inevitably think of another important actor. If the consumer doesn’t like the Nicaraguan chocolate, the story will soon reach an end, no matter how unfortunate this may be for the young farmers of La Campesina. Hannelore, leading our ikbenmeerdanmijnkassaticket.be campaign, gives us an insight in the deepest soul stirrings of her purchasing behaviour. And lets us reach the conclusion that it is simply not that clear or easy. One product is organic, the other not. Now it’s seasonal or local, the next time it’s not. Tens of choices per shopping cart, but seldom straightforward. Often more habit than signal.

“That is why dialogue between consumers and retailers is so important”, Hannelore says enthusiastically. “There are many people who wish to make sustainable choices, but most of them can’t see the forest for the trees. Therefore, with Citizens for the Foodture we organized dialogue tables, challenged consumers with a seasonal vegetables challenge, and had them writing letters with questions to their supermarket. Afterwards, we had retailers write back letters on the dilemmas they are facing.”

For 2019, Rikolto wants to continue on this track, together with organizations like Femma, Test Aankoop and others. Simply, because a food smart city needs empowered consumers 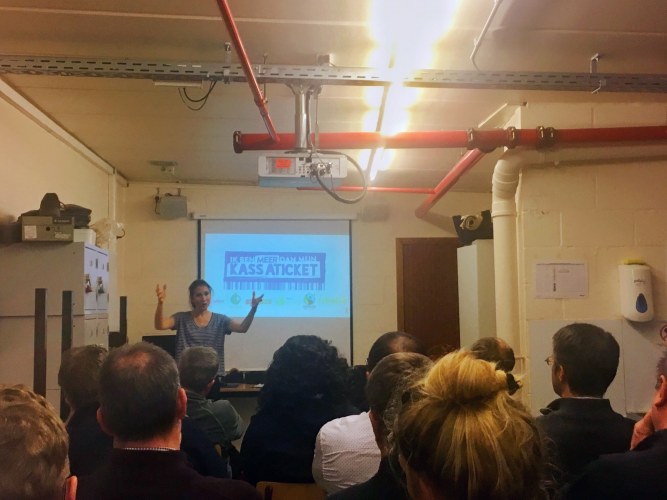 We walk through the tunnel under the railway station and end up in the cosy lunch bar Eetba(a)r. Here we end the day with a special snack: brownies with… red beans.

“What will we eat in the future? And which role can products from the South play in a sustainable global food supply?” Three years ago, this question was the starting point of a research project in which the University of Leuven, UCLL, Colruyt Group, the province of Flemish-Brabant and Rikolto participated. The aim was not just to stimulate the societal debate, but also to literally feed it. We chose three product groups: cereals from the Andes, beans from Africa, and seaweed from Indonesia, all three being potential meat substitutes because they contain high amounts of protein. Under the motto Wanted: Food for the Future brainstorm and cooking workshops were set up with youngsters and young entrepreneurs in Belgium, Peru, Tanzania and Indonesia. UCLL students from Marketing, Nutrition and Dietetics and Event Management worked on concrete results: a mobile Food Lab that held trial sessions in many places, including Pukkelpop, one of Belgium’s biggest music festivals. 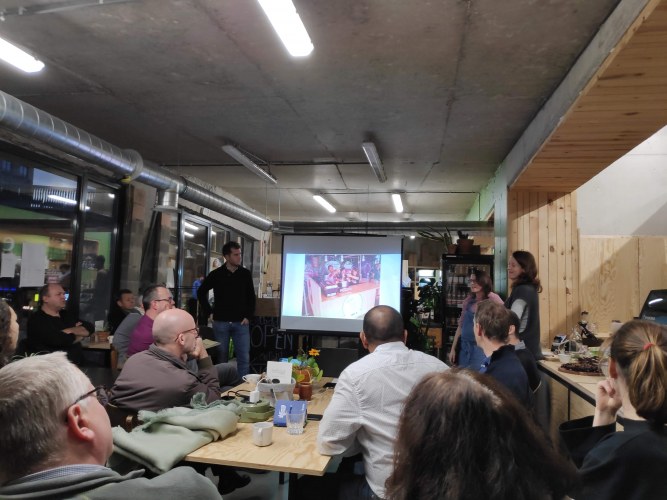 The bio tricoloured quinoa on the shelves of Colruyt was a first tangible result, our bread slices with fresh seaweed pesto and our brownies with red beans of today another one. Marieke, the young entrepreneur behind Eetba(a)r, started working with the product groups used in the project in her bar. The other principles of her business: focus on seasonal vegetables, preferably short-chain and where possible organic, also limited, re-usable or compostable packaging –hence the wooden boxes at lunch– and ecological transport.

In short, everything a food smart city needs.

“Tasty”, our board members conclude. “A lot of inspiration we can take with us to the other Rikolto’s offices!”