Sustainable production, the only salvation for Lake Apanás

Sustainable production, the only salvation for Lake Apanás

in News
Sustainable production can save a lake in Nicaragua
This news is part of the following focus area:

In 1964, one of the most important hydroelectric projects in Central America was launched in Nicaragua, which would completely change the landscape of a city when a successful 54 km² reservoir was built for energy purposes. However, more than half a century later, it is in agony due to poor agricultural practices and the effects of climate change.

This is the first part of the story of Lake Apanás, the country's first artificial lake, now in danger of extinction, and an approach to its conservation.

In the department of Jinotega (north), near the valley of La Cruz, surrounded by mountains and mist, lies this artificial lake, which is the main generator of energy for the national electricity grid and represents 35% of Nicaragua's total consumption.

Over the years, its waters have also become the main support for the activities of 3,500 coffee growers and another 3,000 vegetable farmers. 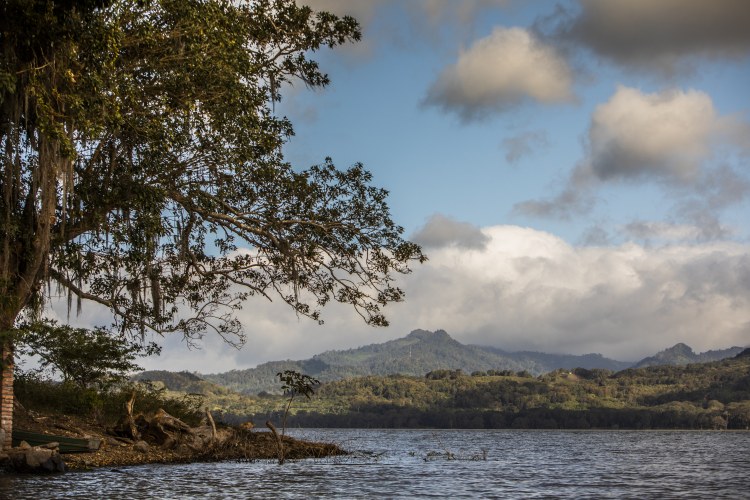 The importance of Lake Apanás for national food security is summarised in the fact that 60% of the vegetables consumed in the country's main markets and supermarkets.

Its importance for national food security is summarised in the fact that 60% of the vegetables consumed in the country's main markets and supermarkets, as well as in restaurants and food-related businesses that buy lettuce, tomatoes, chilli peppers, onions and cabbages, among other products from the shores of the lake, come from its surroundings.

The reservoir also represents everything for the few artisanal fishermen in the area.

Its importance is also environmental: by creating a habitat around an artificial lake, an ecosystem developed over time that today is home to great biodiversity and is a nesting site for migratory birds during some months of the year.

For this reason, in 2001 it was declared a Wetland of International Importance or Ramsar site, according to the UNESCO-sponsored Convention of the same name. Species such as the guapote, tilapia, mojarras, herons and ducks found a home in the creation of the body of water that is fed by the currents of eight rivers, among them the Jigüina, Mancotal and Tuma rivers.

Species such as the guapote, tilapia, mojarras, herons and ducks found a home in the creation of the body of water that is fed by the currents of eight rivers, among them the Jigüina, Mancotal and Tuma rivers.

Although Lake Apanás offers picturesque landscapes with calm waters and islets surrounded by magnificent mountains worthy of being photographed, its waters are beginning to show progressive deterioration as a result of the multiple uses to which it is put. 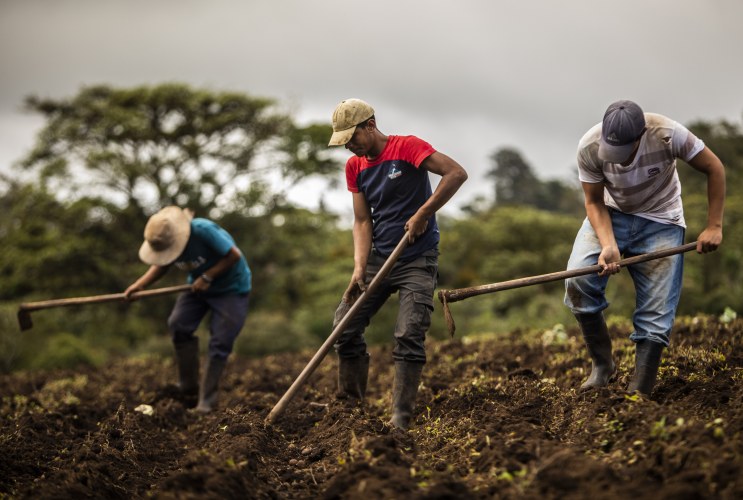 Tilling the land on a farm in the surroundings of Apanás.

Katia Montenegro, head of research at the Nicaraguan Centre for Aquatic Resources Research (CIRA/UNAN-Managua), came to study the lake a few years ago at the request of the Nicaraguan Electricity Company (ENEL).

Montenegro says that the main factor affecting the lake is sedimentation, a phenomenon produced by the erosion of the surrounding soils caused by agricultural activities in the area and deforestation.

According to the researcher, "sedimentation, i.e. the deposition of suspended material that reaches the bottom of the reservoir, primarily causes the dragging of pollutants such as metals or pesticide residues, but also causes problems of suspended solids in the ecosystem, affecting the organoleptic quality responsible for the turbidity of the water. "The water is more turbid, dirtier, let's say".

"Turbid waters are less productive waters in terms of oxygen production by algae, by phytoplankton, which is the base of the food chain in aquatic resources," she says.

According to Montenegro, although sedimentation is not a new problem, it has worn down the reservoir in recent years, limiting its oxygen production capacity and eventually its use for agricultural activities.

"Turbid waters are less productive waters in terms of oxygen production by algae, by phytoplankton, which is the base of the food chain in aquatic resources," she says.

Domingo Rivas, a professor who has studied the area, warns that "this erosion of agricultural land has repercussions on the sediment transported towards the lake, which in the future will affect the capacity for hydroelectric generation, and producers will suffer a direct loss in their production capacity".

"Some even say that there is already a loss in water storage capacity of up to 50%," he adds. 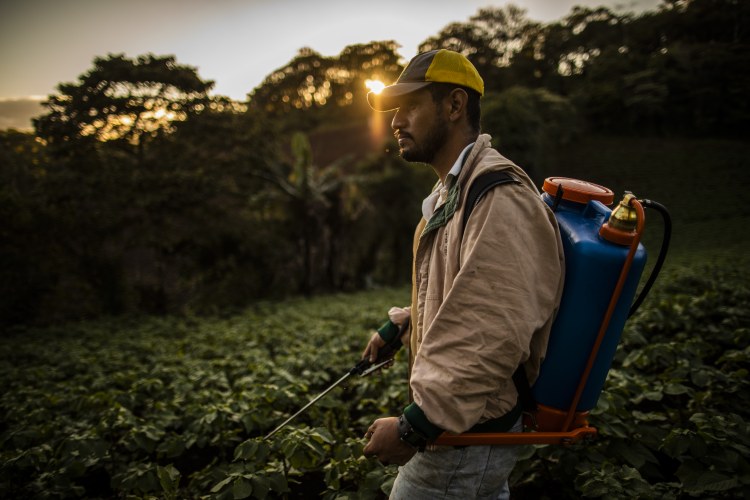 How do we manage trade-offs? MASLAGO is one of the four new SFS Programme case studies from CIAT (Alliance of Bioversity International and CIAT), Hivos, IFAD, and Rikolto that address some of the issues in our food systems through the use of a holistic lens - a "food systems approach".

Be inspired by this case studies!

Norvin Palma Luna is an inhabitant of Jinotega and project manager of La Cuculmeca, a social and environmental organisation in the area that shares a table at MASLAGO.

Like all other Jinotegans, he is aware of the importance of this lake for his city, and when in 2016 he heard that Rikolto, another organisation working on environmental sustainability, was looking for institutions interested in rescuing Lake Apanás, he did not hesitate to join in.

Private companies, various environmental non-governmental organisations (NGOs), producers, universities, the indigenous community and some state institutions joined the calls for proposals that did not aim to find the culprits of the problem, but rather the solutions to it.

Initially, Rikolto and La Cuculmeca mapped local actors, and at least 20 institutions that might be interested in taking action to combat the sedimentation and contamination of Lake Apanás responded to the call.

"From this approach, it is not that we don't want the production to stop, but rather that it is done differently. It is to give a different approach to production in its environment: a more sustainable production, a production that is friendlier to nature and the lake itself", adds Palma.

The Integrated Landscape Management experts add that the aim is to "build collaborative relationships by explicitly addressing synergies between actors and between different geographic areas, as well as trade-offs that may eventually be necessary for the process of landscape use and management".

Together we decided to draw up an action plan in one of the eight micro-watersheds of Lake Apanás, which is the Sisle micro-watershed. That's when we all started to converge and said 'OK, with the resources we have, let's focus on that micro-watershed so that we can get some results

In Nicaragua, once the MASLAGO group was created, a sustainable action plan was developed for the area around Lake Apanás, focusing on helping producers to improve their economic income, apply better agricultural practices and generate healthier vegetables for the final consumer, through the creation of an alliance between four cooperatives of horticultural producers.

Guillermo Gutiérrez, coordinator of MASLAGO for Rikolto, explains that the platform made it possible to identify actions being carried out by some of the participating organisations that others were unaware of, despite the proximity of the intervention area and the fact that they are located in the same city. "This allowed us to have synergies and to finance all these actions," he says.

In 2019, MASLAGO selected an area of 24 km2 called "showcase" in the Integrated Landscape Management approach and delimited it with seven model farms located in a micro-watershed known as San Antonio de Sisle, which is composed of two rivers that join and drain their waters towards Lake Apanás.

To select these farms, their owners had to be members of a cooperative, have five to 10 manzanas (35,000 to 70,000 m2) of land in agricultural production, and have at least some good environmental practices. 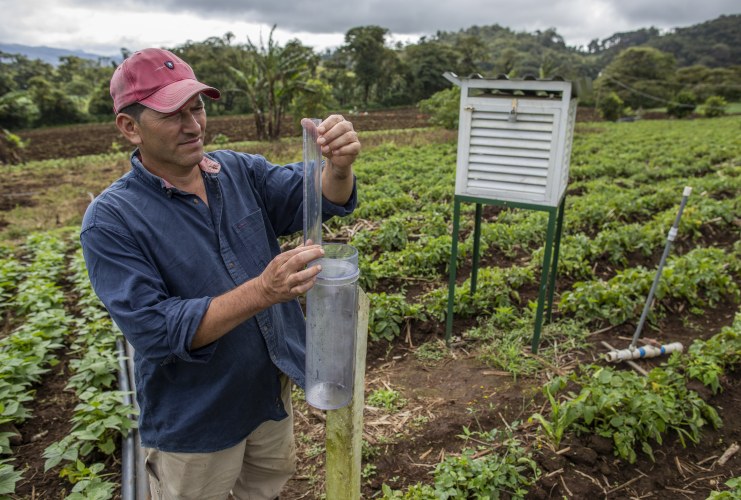 Jose Maria, one of the farmers running a model farm, implementing sustainable and climate-friendly practices.

"We found that these farms that manage three to five environmental practices are less vulnerable to price changes or climate impacts on a crop," says Domingo Rivas, who met the MASLAGO group as a university lecturer and contributed to the producers in the implementation of sustainable practices.

Among the main practices that were taught to the producers, Rivas underlines:

José María Torres is a farmer living in San Antonio de Sisle. From his farm, at about 1,200 metres above sea level, he has a privileged view of Lake Apanás.

He lives in one of the highest parts of the micro-watershed and was selected to be part of the model farm programme. In recent months he has been visited by students and academics in an exchange he has never had before in this remote region in the north of the country. 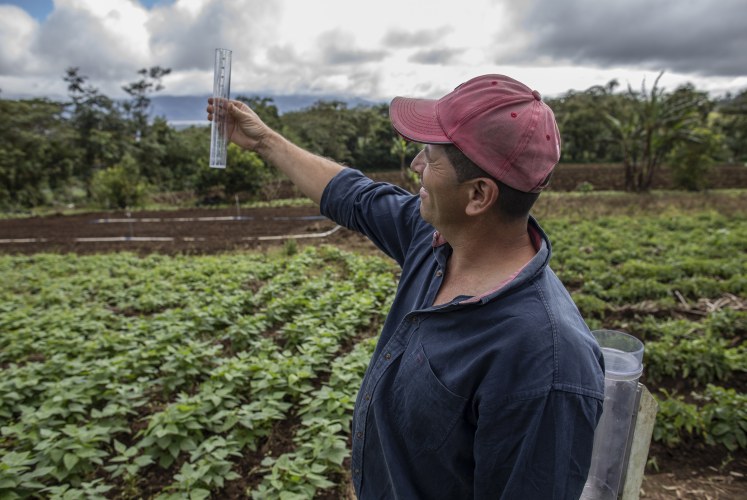 Here are the springs, the eyes of water, I have a little eye of water that I protect and take care of. Maybe that's what makes my little farm a model farm, the little eye is important for the San Antonio de Sisle river. There is a small forest, but I don't harvest firewood, I live taking care of it and protecting it" says the farmer proudly.

José María and his family grow maize, beans, potatoes, cabbage, lettuce and chiltoma. He acknowledges that the landscape has changed considerably in recent years due to the advance of the agricultural frontier and deforestation: "I have planted approximately 500 trees next to the natural forest and they have grown and are maintained there. The important thing is not to cut them. It doesn't need fertiliser, it doesn't need irrigation. Just take care of it, don't cut it", he insists in the middle of a potato plantation.

"I have planted approximately 500 trees next to the natural forest and they have grown and are maintained there. The important thing is not to cut them. It doesn't need fertiliser, it doesn't need irrigation. Just take care of it, don't cut it"

In addition to the support of the university students who have come with MASLAGO to his farm, José María Torres has received resources such as tools to apply good practices both in the field and at home. In his kitchen, for example, he has installed an Ecofogón (Eco stove) that serves to halve the demand for firewood for family consumption and has an exhaust that allows the smoke to escape to the outside and not be breathed by the members of his family. 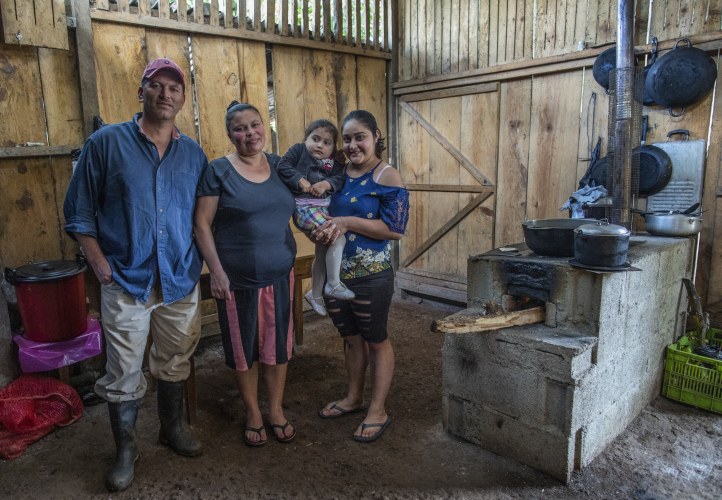 José Maria along with his family, and behind them the ecofogon, which is installed in the model farms.