A study: Minimising the carbon footprint of organic coffee production

A study: Minimising the carbon footprint of organic coffee production

in News
Peruvian coffee, among the best of South America
This news is part of the following focus area:

For businesses all around the world, the push to be carbon-neutral continues to be a huge priority. The coffee sector is no exception. Climate change threatens the amount of land suitable for coffee farming around the world, making production more difficult and more expensive.

In addition, consumers are increasingly buying sustainable and ethical products, meaning that there is a growing market for environmentally responsible products. As such, a number of studies and projects within the coffee sector have focused on minimising the impact of the carbon footprint of coffee production.

One example was conducted in 2019 by Rikolto in partnership with the Pontifical Catholic University of Peru (PUCP) and La Prosperidad de Chirinos, a professional coffee co-operative with more than 800 members. Its aim was to learn more about the carbon footprint of organic coffee production and how coffee producers can access new markets by improving production practices.

To learn more about this study, I spoke with experts from Rikolto, PUCP, and La Prosperidad de Chirinos. Read on to find out what they told me. 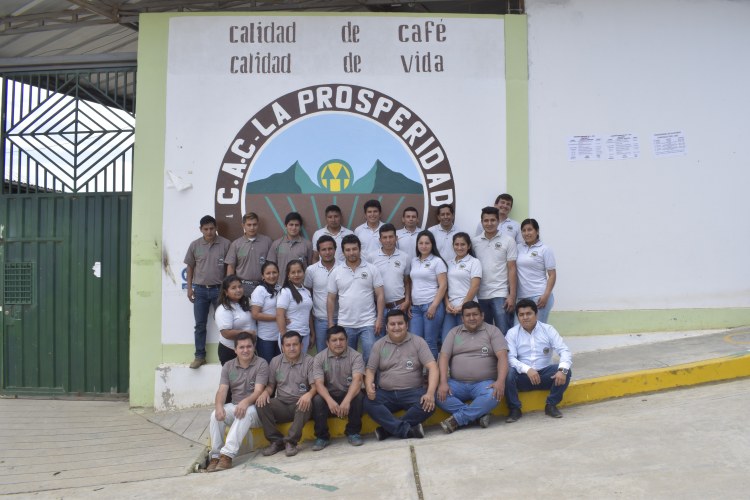 The carbon footprint of coffee: An overview

As with any product that travels along a supply chain, coffee uses energy, generates waste, and therefore has a carbon footprint.

While many would assume the carbon footprint of coffee is mainly attributed to shipping and transportation, processing and many other post-harvest processes also require the use of machines or fuel. This means coffee production itself needs to be considered.

How do you calculate the carbon footprint of coffee?

To calculate the carbon footprint of coffee, you need to take into account all the emissions generated not just by harvesting, processing, and shipping, but any processes that use energy in relation to the coffee plant. For this study, the focus was on organic green coffee production, meaning there were no emissions related to agrochemicals. It focused exclusively on the coffee’s life cycle on the farm.

The study started by evaluating the carbon emissions of each individual coffee plant. These took into account all the CO2 that each plant would be responsible for throughout its life cycle.

“For example, when the coffee is planted, we examine the fertilisers used and their emissions. We also examine each transportation method used to ship the green coffee once it is harvested and processed. Finally, we measure the use of fossil fuels and analyse the impact of the CO2 as we add them up. Essentially, we keep track by identifying all of the emissions and capture of CO2 at each step of the supply chain."

This is known as life cycle analysis: the process of tracking the emissions of a product (in this case, coffee) throughout the entirety of the supply chain.

Lith Montes is the Coffee Project Coordinator for Rikolto in Peru. She says: “Once we have an understanding of each step of the process, we can then look at the emissions.”

She adds that these emissions are offset against a process known as carbon sequestration (which is when CO2 in the atmosphere is reabsorbed or “captured” by plants).

“We sampled 30 coffee plots, and quantified the coffee plants that were shaded and not shaded,” Lith explains. Generally, coffee plants grown under shade will have a lower net carbon footprint, as more trees nearby means more carbon is captured.

“By quantifying this and using other scientific tools, we are able to measure the balance of carbon emissions against the CO2 that was captured.”

Lith explains that the study confirmed carbon-neutral coffee was already being produced at La Prosperidad de Chirinos. Effectively, this means that some plants that actually captured as much CO2 as they were “responsible” for emitting throughout the supply chain. This was a major discovery during the study. One of the key reasons for this was the distribution of agroforestry systems. Agroforestry is the practice of growing crops among shade trees in the same area of land. In these systems, sampled coffee plants at La Prosperidad de Chirinos captured between 16.90 and 21.63 tonnes of CO2 per hectare per year (tC/ha). However, where these plants were grown under shade, the shade trees they were grown among also contributed to carbon sequestration.

The same study found that while the figure varied heavily, the shade trees were able to capture between 27.90 and 257.80 tC/ha per year each – far more than the coffee plants alone. While coffee production has historically been associated with deforestation in certain parts of the world, this study indicates that shade grown coffee can offer a number of benefits for producers who want to minimise their carbon footprint.

Mariela Wismann is the Director of Rikolto’s Latin American Coffee Program. "Organisations are realising that the practice of 'clearing' the plots of trees (logging) has a high environmental cost,” she says.

“Now you have to get used to reforestation.” Alexis Dueñas is a professor at PUCP and a member of the investigation team. “Knowing how to choose the species and number of shade trees for the plot has a triple impact,” he says. “[It impacts] carbon capture, the environment, and the income of the producers.”

As well as pointing to a sustainable future option through agroforestry production systems, this can also help producers to differentiate their coffees for buyers. For instance, carbon-neutral organic coffees grown in agroforestry systems could support producers in regions where cup scores might generally be lower than other producing areas.

Lith tells me that in Peru, these areas include Central Selva, Junín, and Pasco, among other regions. She says that producers from these areas can benefit from alternative market opportunities such as selling carbon-neutral or even carbon-negative coffee. These will be more attractive to roasters looking to meet the consumer demand for environmentally sustainable products. 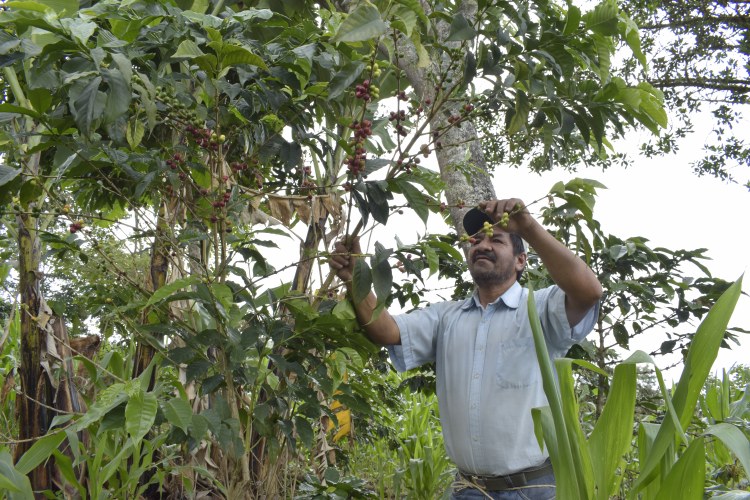 Ysaac Ramirez is a member of La Prosperidad de Chirinos. He says: “Producers as direct stakeholders need to think solutions to this problem of climate change that affects their main economic activity."

At La Prosperidad, wet milling and drying were the two stages that contributed the most CO2 before coffee left the farm. Though producers were already working towards more sustainable solutions (such as reusing coffee husk and creating organic compost with coffee pulp), they are now looking at other key areas, such as honey water treatment, water consumption, and waste segregation.

According to Lith, this is why Rikolto is pushing an additional study on wastewater in coffee plots in Cajamarca with PUCP and La Prosperidad, plus two more coffee organisations, Aprocassi and CENFROCAFE.

In addition, this will also support producers to access certain markets. For example, in the EU, from 2022, new regulations will prevent the import of products that do not meet certain environmental care standards.

This study has allowed us to think about carbon neutral certification,” he explains. “We are looking for specific partners and working on carbon neutral bonds. We [will] look for an additional payment for the producer in the future.

However, it will be critical that producers understand that reducing their carbon footprint can be achieved through agroforestry models. These studies are a good step, but wider recognition will help.

Ysaac Ramirez is a member of La Prosperidad de Chirinos. He says: “Producers as direct stakeholders need to think solutions to this problem [of climate change] that affects their main economic activity.

“It is scientists and academics who [can provide] knowledge to make agriculture more sustainable for the benefit of the community.”

Alexis agrees, noting that producers often actively want to learn more about agroforestry systems. “Now, the role of the academy is to co-create innovations with producers so that the research can become practical action guidelines for the organisation,” he says.

While understanding how coffee production affects the environment is rightly a high priority all across the coffee sector, calculating the carbon footprint of coffee at origin (and minimising it) is a good first step that draws attention to some of the solutions that can be implemented. 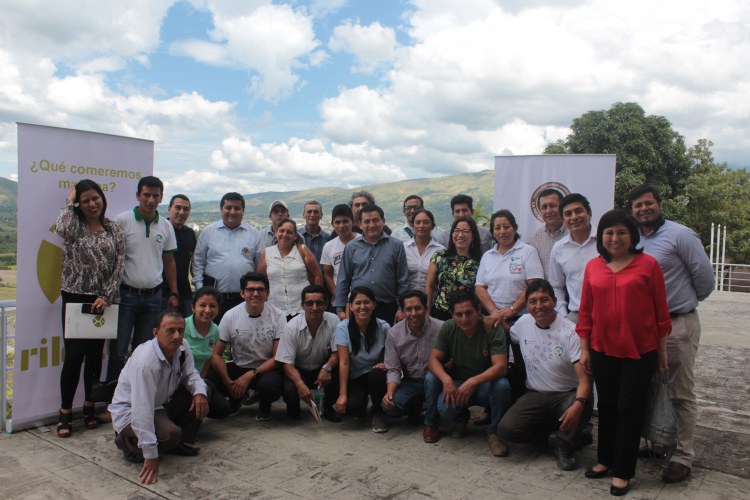 Presentation of the carbon footprint study at Cajamarca

Carbon sequestration in coffee cultivation will likely only become more important in the years to come. By using life cycle analysis and other sustainable production studies, producers will be empowered to adopt agroforestry systems, combat climate change, and improve market access.

The hope now is that this collaboration between producers and academic institutions will be supported by more environmentally responsible actions across the supply chain.

Ultimately, the industry-wide push for greater sustainability will inspire producers to learn, participate, share, and discuss the carbon footprint of the coffee they grow. In the future, hopefully official carbon neutral certifications will help the sector move towards a future for coffee production that is fair, responsible, and sustainable.

Do you want to know more about this initiative? Contact us:

This article was originally published in Perfect Daily Grind (PDG). Read the English and Spanish version.