The strong women of Satipo: the experience of the Women's Development Committee of CAC Pangoa

The strong women of Satipo: the experience of the Women's Development Committee of CAC Pangoa

The use of a calculator – something that might seem like a simple task to many people – was the starting point for a large number of women on the road to economic independence and empowerment in the province of Satipo in Peru. So how did learning to add, subtract, multiply and divide using this simple device lead to them becoming more and more involved in tasks that were previously the exclusive domain of their partners? This is the story of the Cooperativa Agraria Cafetalera Pangoa (CAC Pangoa) – the Pangoa cooperative of small coffee producers – and its efforts to bend the balance towards gender equality and foster greater economic and social development for its members. 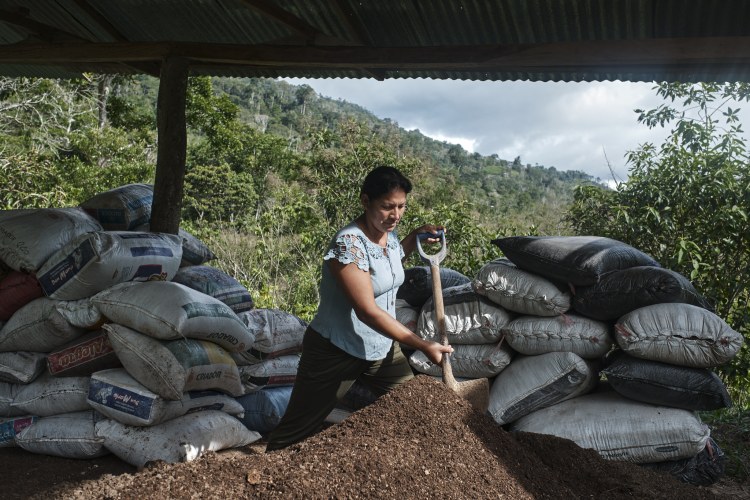 Many women complemented the fieldwork by supervising the drying of the coffee, and some were involved in the administration of the business. It was work that was not recognised, much less paid.

The cooperative was founded in 1977. At that time there were 50 members, all men, and their main objective was to improve the price of their products by supporting each other in overcoming any obstacles they might face; they saw no need to involve their spouses or daughters in this endeavour.

According to Esperanza Dionisio, the emblematic former manager of the CAC Pangoa, women had to be at home – cooking and taking care of the children. Many women, however, complemented the fieldwork by supervising the drying of the coffee, and some were involved in the administration of the business, but these tasks were made invisible due to the gender roles they played in their homes. It was work that was not recognised, much less paid.

It took 20 years for things to start to change.

"The work was divided up – the women had to be in the kitchen, look after the children, look after the small animals – and the drying of the coffee was their responsibility on the small farms, the chacras. The men dedicated themselves to the hard work – harvesting, carrying, all those jobs that demand energy. Women were not very involved in the economic side," says Esperanza. 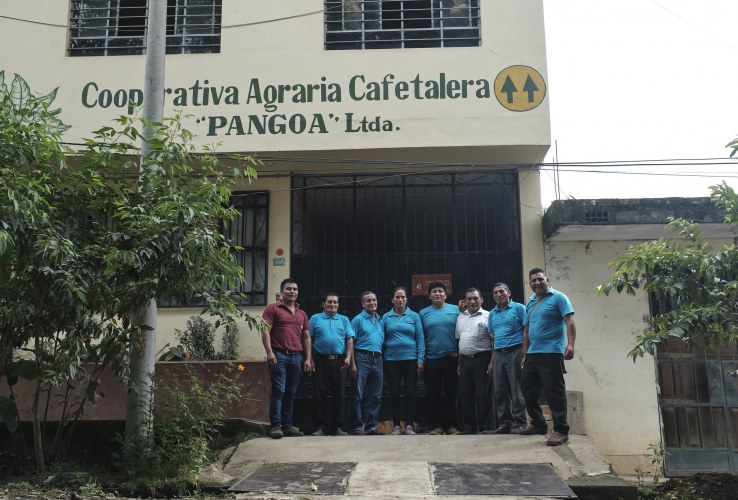 The cooperative was founded in 1977. At that time there were 50 members, all men, and their main objective was to improve the price of their products by supporting each other.

She became the general manager of the CAC Pangoa in 1997, the first woman to hold such an important position in a Peruvian coffee cooperative. Being the head of the cooperative broke the mould, but she saw that there was still a lot of work to be done.

"At the beginning, we only sold conventional coffee on the stock market; the profit margins that remained were minimal, and we had to get money from wherever we could to pay back the members before the end of the year," Esperanza recalls.

Those were very difficult times until, in 2001, after painstaking research and adaptation of their processes, they obtained their seals for organic coffee and fair trade. These certifications opened the way to international cooperation and large markets abroad. However, the greatest achievement was gaining allies interested in the development of the community and involving women in the process.

In the same year that Esperanza took over management of the cooperative, several strategic alliances were established, including the Andean Cooperative Development Programme (PADECO) of the Society for International Development Cooperation (SOCODEVI), which contributed to the first steps towards improving women's participation in the administration of their family businesses.

These efforts prompted the creation of CODEMU, the Women's Development Committee of CAC Pangoa. There, the introduction of the calculator became a fundamental factor in women beginning to empower themselves and develop other skills, as part of a process towards economic, physical and decision-making autonomy.

"First we bought them the calculators and taught them how many kilos a can of coffee weighed so that they could start doing calculations for selling the coffee," says Esperanza. Most of the women had to start from scratch because they had never been to school, although they were very interested in learning. "Not all of them knew how to add and subtract, only some of them, but they had other abilities. Many didn't know how to read or write, but they had all the necessary knowledge in their brains". From technical skills, they moved on to social skills, and thus improved their self-esteem." They asked for training, and if, for example, they had difficulties expressing themselves, they learnt how to do this in the workshops,” she says. 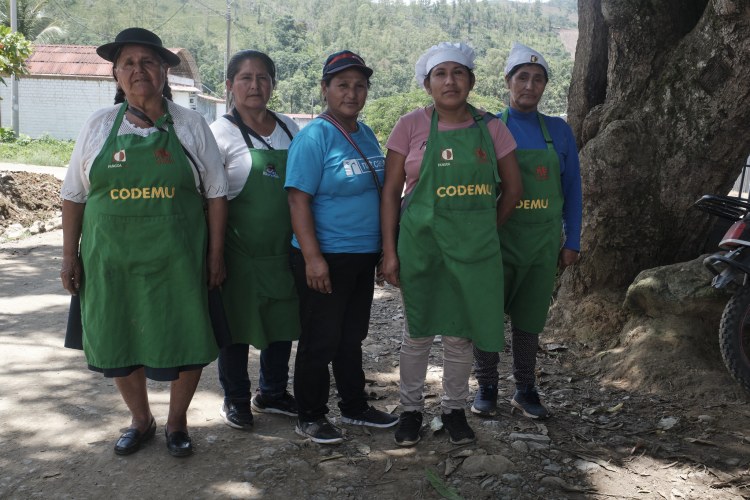 Members of CODEMU, the Women's Development Committee of CAC Pangoa.

Over the years, the training made an impact at home, as the women recognised the importance of learning and wanted a better future for their children through education. The number of children in school increased, and they no longer sacrificed hours of study to help their parents on the farms, because they understood that knowledge of reading, writing and mathematics was more beneficial to their economic well-being. The CODEMU had promoted a change that affected more than one generation.

While the CODEMU was originally a space for women members, it later incorporated young people and promoted changes with and in favour of upcoming generations.

"Through the committee, the co-operative made a commitment to young talent - with training, internships, scholarships - and enabled the necessary conversations within families, to increase awareness of gender equality and create conditions to foster development for the sons and daughters of members,"

However, at first, not all families accepted these changes. For example, not all spouses were keen on their wives leaving the house for several days of training. There was a lack of understanding of the nature of the workshops, and many participants said that a condition for attending these activities was to leave the house clean and have lunch prepared before leaving.

"There was one of the women whose husband used to drink alcohol and beat her, but with the workshops, she was encouraged, and said to her husband: `You take care of the house. She left, came back at noon and the man had done nothing, the house was dirty, and lunch had not been prepared,” Esperanza remembers. Discussion at home was not the only problem: in extreme cases, violence against them was reported.

"We no longer rely solely on coffee or our husbands' work”

Despite all this, the work done by the CODEMU made a difference in the life of the women producers in Satipo. Vilma Caso, daughter of a founding member of CAC Pangoa, owner of the Oropel farm in the village of Villa Progreso de Eden in Mazamari, is one of the many who have benefited. She has been a member of CAC Pangoa for 10 years, allowing her to have better control of the processes within her farm. “I used to sell coffee on the street, but I realised that the cooperative was reliable, that the weighing was accurate and that they offered support and technical advice. I was encouraged and was able to get my farm organised and put my equipment in order," says Vilma.

What she learned in the Women's Committee enabled her to improve production and sales, as she also participates in a ‘Saturday Market’ where members offer products such as coffee, cocoa, honey, fruit, vegetables and small animals. Vilma emphasises the fact that she has gained economic independence. "We no longer rely solely on coffee nor only on our husbands' work; as women, we work producing vegetables and raising animals, we generate income and provide for our daily needs," she adds, with great enthusiasm. 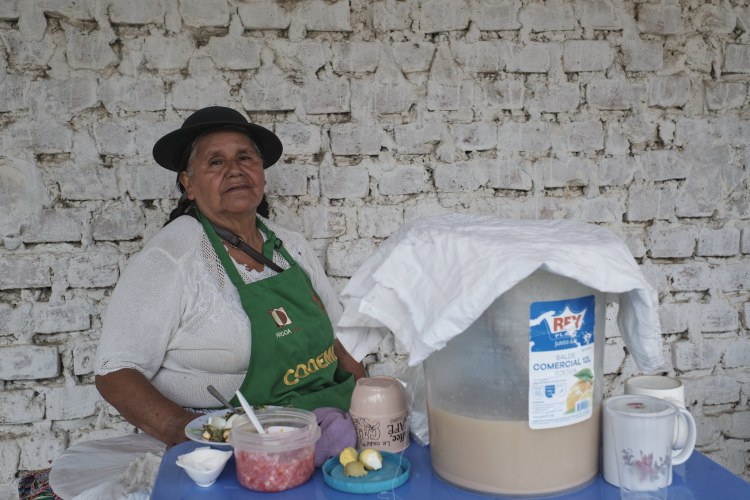 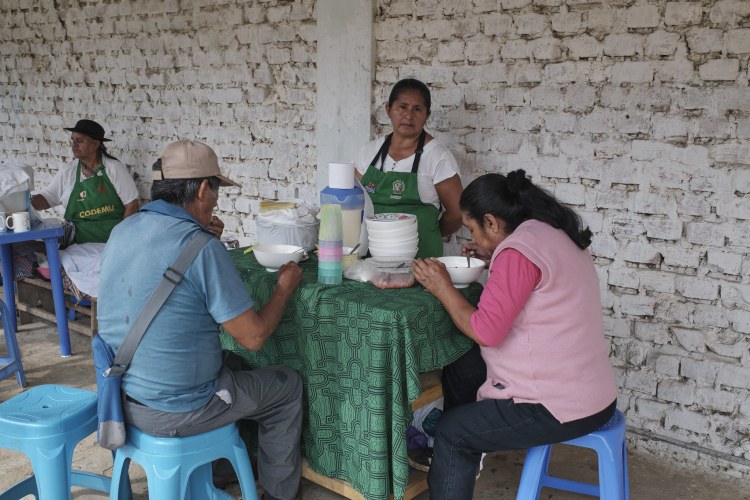 It was precisely the increase in the family economy that tipped the balance in favour of the women's work in the cooperative. 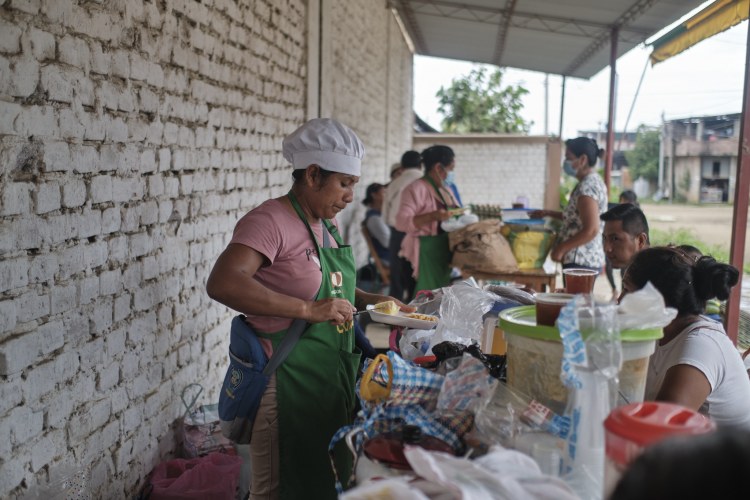 During a ‘Saturday Market’ members of CODEMU offer products such as coffee, cocoa, honey, fruit, vegetables and small animals.

It was precisely this increase in the family economy that tipped the balance in favour of the women's work; their husbands saw that their income improved and they began to support their activities, give them their space and do their share at home. This allowed the members to develop a more active role as leaders, taking on leadership positions at the committee level, in the cooperative itself, and even in their own communities.

In recent years, women involved in the committee have traced their own paths for development and sought new strategic allies for their projects, such as Dean's Beans Organic Coffee Company, Coop Coffees, Appcacao, SOS Faim, Twin, and Terra Nuova, among other partners and clients. After learning about the effort behind the cooperative's production, the companies showed more interest in the women's work and the products they produce and collaborated by providing seed capital so that they could acquire better quality agricultural inputs, adapt the infrastructure of their farms, improve their housing, and invest in education and healthcare for themselves and their families. 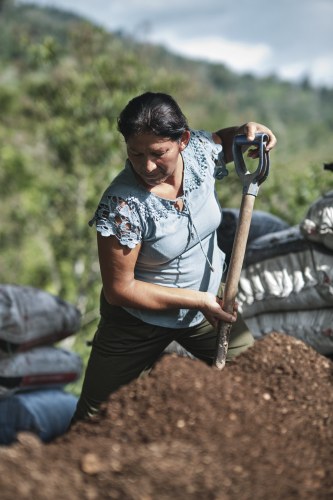 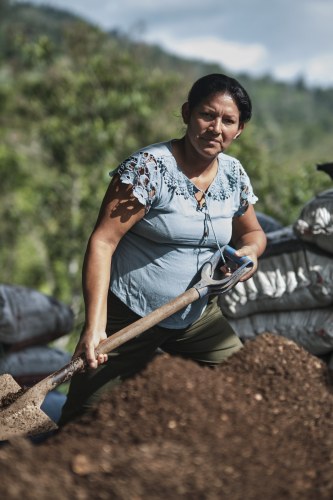 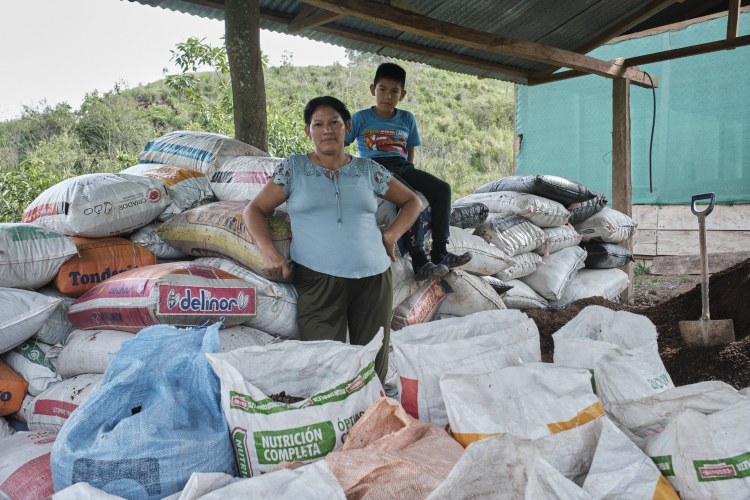 A women's committee, paving the way for new generations

The work initiated by the CODEMU continued with the creation of a Youth Development Committee (CODEJ). The children of the women producers received credits and scholarships to study at different universities in the country. Once they graduated, they committed to returning to work for the development of their families' businesses, either by joining the technical team (this is an award-winning team, with its professionalism recognised by the clients) or by becoming members of the cooperative.

"CODEMU's experience shows us that it is possible to improve the performance of a producers' organisation by promoting inclusion and incorporating young people and women. Today, this is paying off. Its history and challenges might be those of other organisations, and the systematisation of its experience allows us to review it and work on how to generate better conditions for the development of women and their families," adds Wismann.

The CODEMU has drawn on many lessons so far; among them is the experience that fostering women's autonomy allows women to appropriate the public space that was denied them previously, and to support the creation of better conditions for the participation of other women. It is important to have the support of institutions through strategic alliances – women feel they are supported in the process, and increased participation is ensured by encouraging the women to seek better positions within the cooperative. Finally, women continue to value and increase their ability to cope with adverse situations, whether at home or in their communities – setting new projects and objectives to be achieved, individually and collectively.

Women's empowerment, however, is a gradual process; it has to be sustained over time, acknowledging that each woman has a different context and that these particularities make the process different for each one. Besides the very specific processes by which women advance, it is necessary, for their organisations and the context in which they develop, to understand the need to change the dynamics and conditions to allow their complete development, because it is their right and because their inclusion dramatically increases the organisations' capabilities. 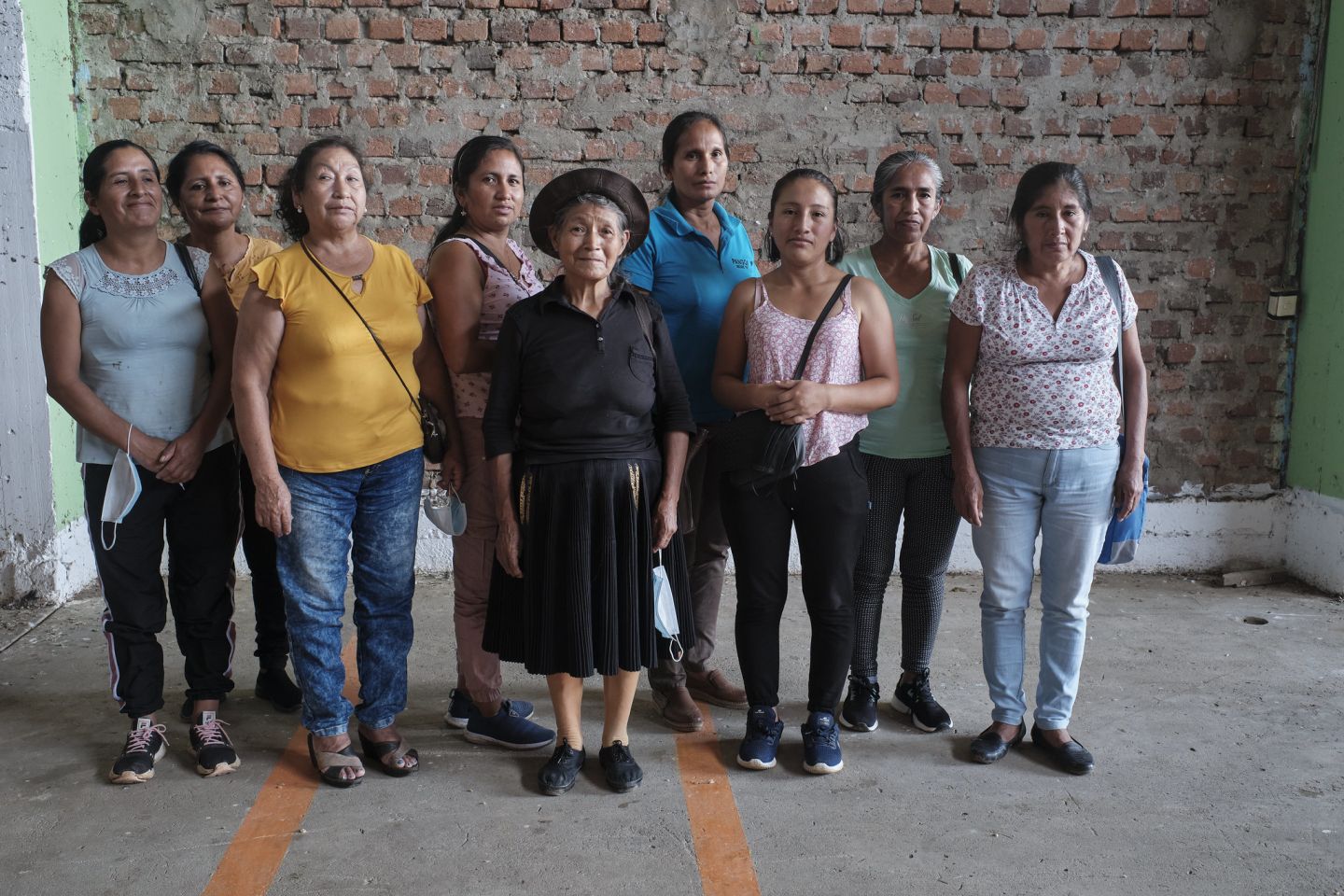 We are convinced that gender equality is key for a sustainable tomorrow. Share this article and tell us how your organisation is contributing to #breakthebias.