in News
This news is part of the following focus areas:

In the highlands of the Eastern provinces of the Democratic Republic of the Congo, farmers produce a delicious coffee. However, production circumstances are all but easy. “While the Arabica coffees of the Kivu’s and Ituri have tremendous potential, it seems as if the circumstances these farmers work in try to do their utmost best to make reaping the benefits as complex as possible”, says Wannes Slosse, a Belgian PhD-student at the University of Ghent examining Rikolto-supported coffee cooperatives in the region. Bad infrastructure and roads, a continuous threat of armed conflict, and high and arbitrary taxes make it difficult to get the coffee across the border and obtain a fair price for it.

Collective action through uniting farmers in cooperatives has proven to be successful in addressing part of these issues. Coffee cooperatives as Kawa Kanzururu, Kawa Kabuya, SCPNCK, Kawa Maber, Bblo Kawa and the still young Kahawa Umoja Wa Rutshuru improve the lives of thousands of coffee farmers in the region. However, despite their efforts, both farmers and cooperatives are confronted with constraints imposed upon them by the region’s specificities which they try to overcome. 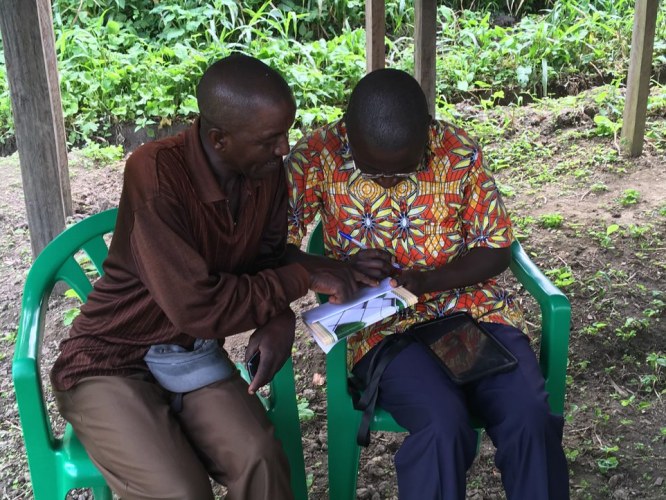 Coffee from the Congo: a bumpy road from Plant to Cup

In his latest research, Wannes has examined a consequence of these constraints: the phenomenon of so-called ‘Side-Selling’. Side-selling is the part of their produce which cooperative-farmers decide to sell outside of their cooperative, often despite lower prices at these non-cooperative outlets. “By looking at the socio-economic characteristics of the farmers, we wanted to understand two things: Who is selling more outside of the cooperatives, and more importantly: Why?”, Wannes puts forward. While the prices farmers can get from the cooperatives are substantially higher, a large share of them still decides to sell part of their coffee to non-cooperative traders. Because of the state of the infrastructure and the unsafety of the region, coffee which is sold via these channels goes through a lot of hands before it crosses the border. All these middlemen capture part of the coffee’s value, which is translated into a lower price for the farmer. Once the coffee gets into the neighbouring countries, it gets a stamp, declaring it as being Ugandan or Rwandan coffee, and gets into global value chains as such, formally losing its Congolese origin. It makes sense that surpassing all these middlemen via a cooperative is translated into higher prices. Furthermore, the coffee which is produced at the cooperatives’ coffee washing stations is of a significant higher quality. Higher quality coffee, of course, means you can demand higher prices for your coffee. Cutting out middlemen, bring higher quality to the table, and moreover going to this table as a collective, strengthens the bargaining power of the farmers and gets them higher rewards for their work. Wannes summarises, “It’s quite clear: together, you’re stronger.”

“Problem is, if you don’t have enough food to put on the table, you’ll need money, and quickly. And that’s when collective action starts to crumble”, he continues. In his research, they found that the lack of sufficient food in the household has the largest impact on side-selling. This can be explained by a problem of liquidity, both for the farmers as for the cooperatives. While the cooperative price is clearly higher than any other the farmers can get, it can take up to 6 or even 9 months before the cooperative is able to pay the farmer. Wannes explains that “this is the main benefit of dealing with these middlemen. They might pay less, but they pay immediately. If you’re hungry today, you can’t wait on a payment months in the future.” Other results in the research confirm this. Farmers who report they are able to get credit from their cooperative, and thus face this liquidity-problem to a lesser extent, are less prone to engage in side-selling. Moreover, farmers with smaller plots of coffee, also appear to side-sell more, confirming that it is the more vulnerable who have more need for these immediate payments from middlemen.

This is really important. While prices are lower at these non-cooperative market channels, it’s especially the most vulnerable who are selling larger shares via there. It’s a vicious circle! However, there’s some silver linings”, Wannes says. “For one, the younger farmers appear to be less interested in side-selling their coffee!

That is also why, in our coffee programme in eastern DRC, increasing youth involvement in cooperatives has been high on our radar. To grasp the interest of young people, it is key to open up opportunities that go beyond only producing coffee. Since the start of the DGD-funded programme in 2017 , Rikolto has been supporting young men and women to start tree nurseries and sell the young plants to the members of four coffee cooperatives. Specific training was given to improve their business and especially marketing skills.

In the frame of the PASA-NK programme funded by IFAD, young entrepreneurs have produced and sold 816,950 seedlings in the area of Lubero and Beni in 2019. It takes creative ideas to launch these businesses. Kakule Mbafumoja is one of the young coffee farmers with his own coffee seedling nursery. Yet, the right material, such as the black bags used to grow seedlings, is hard to come by. Instead, Kakule has started re-using bags used to package alcoholic drinks:

I help my clients to plant their coffee seedlings. This way, I can recuperate the bags again and re-use them.

Slowly, these young men and women are contributing to the rejuvenation of old coffee plantations, and with it to generational renewal in the coffee sector of the DRC. The number of young farmers -aged 35 and less- in our partner coffee cooperatives, has been fluctuating between 20% and 25% in the past few years. It is a hopeful sign for the future of DRC’s coffee sector, as these young coffee farmers and entrepreneurs bring in innovative and sustainable ideas and a changed mindset with regards to cooperative membership.

If we want to continue to help farmers in achieving a higher, and above all fair, remuneration for their coffee, we need to continue investing in potential ways forward. Working via the cooperatives is successful, but we need to continue to support them in overcoming the constraints they still face. Attracting buyers, delivering high-quality coffee, and combatting issues of liquidity can improve the services cooperatives can offer to their members.

Within the cooperatives, it is crucially important to invest in young farmers, the future of Congolese coffee!