For the last 10 years, the couple have been Onion Farmers, this being the major source of their livelihood.

Hellen Akware and Sam Ongole are a prominent family in Kabosa Village, Kwapa Sub-County, in Tororo District, Eastern Uganda. For the last 10 years, the couple have been Onion Farmers, this being the major source of their livelihood. They joined the Kwapa Area Co-operative Enterprise (KACE) two years ago and already attest to the benefits. With assistance from RIKOLTO, their produce is bulked together with that of the other 1045 farmers in the cooperative and their produce ends up in markets in Southern Sudan and other already established modern markets with some of East Africa’s largest shopping stores, Tuskys and Nakumat Supermarkets as enlisted clients. Hellen and Sam are also members of the Cooperative’s SACCO.

Before joining the Area Co-operative Enterprise (ACE), Hellen says that they used to sell a kilogram of their onion produce at a farm gate price of Shs. 1500 to Shs. 2000 but the ACE’s bargaining power earns them between Shs. 3000 to 5000 per kilo. By linking the Co-operative to external markets and eliminating middle men, RIKOLTO has helped boost incomes of small holder onion growers at the grassroots.

Hellen and Sam are also members of Kabosa Onion Growers Association, one of the 40 Rural Produce Organisations (RPOs) organised under the farmers’ cooperative. Sam is the treasurer of the 30 member group. He asserts that they have benefitted from the trainings on how to improve the quality and quantity of their produce. The couple who started with 3 acres have increased production to 5 acres and their biggest harvest so far has been 10,000kgs. Their desire is to increase this acreage to 10 in the next 2 years.

They have been able to build two houses, connected them to solar power and are able to afford quality education for their children. To supplement their income they bought a motorcycle which is hired out daily for taxi business and are diversifying to other crops. In their back yard is a 3 acre Cassava garden, a crop they ventured into recently. They also keep a small number of goats and cows. Theirs is a story of prospects and enterprise for smallholder farmers. 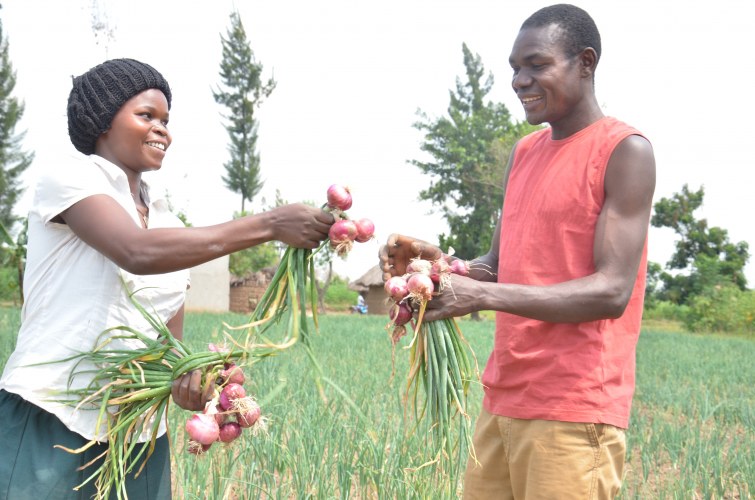 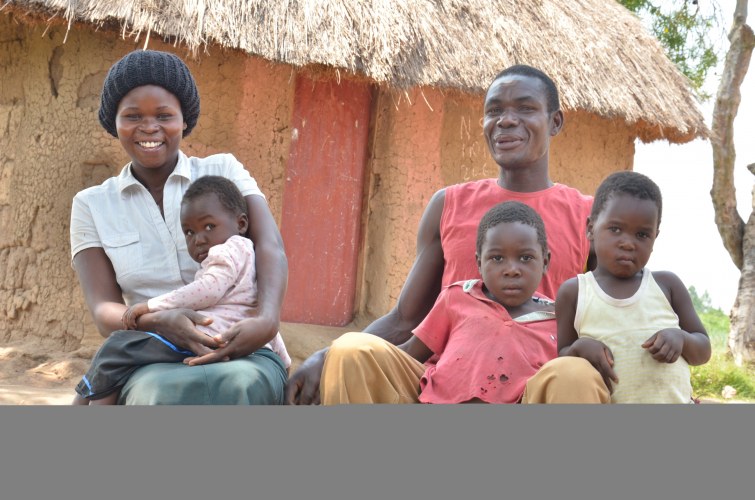 Hellen & Sam at their home and some of their children