in News
Producing quality rice for Burkina Faso's markets
This news is part of the following focus area:

Since October 2018, Rikolto has been implementing the "Qualiriz: Selling quality rice for a better income" project in the Centre-East region of Burkina Faso, in partnership with TRIAS, INERA and SICAREX. The project is financed by the Alliance for a Green Revolution in Africa (AGRA)

The project aims at bringing sufficient quantities of quality rice to local markets. On the one hand, we support rice producers’ capacity to supply quality paddy rice to the husking units and mills in the area. On the other hand, we strengthen the processing and technical capacity of the rice husking units, so that they are able to bring better quality rice to the market. In addition, we enable contacts with traders for the distribution of local rice on the market and support the mills and traders to establish contractual relations.

Rikolto’s role is to support the rice mills in establishing commercial relationships with rice producers and in upgrading their units so they can bring sufficient quantities of quality rice to the market. About two years after the project’s kick-off, we talk to three owners of rice mills in the region.

Rising demand, and the struggle that comes with it

Marcel Kaboré is the promoter of the Kaboré rice mill in V7 village near Bagré. “When I arrived in Bagré in 2000, I first invested myself in the production of the paddy. I joined the "Song-taaba" rice producers' cooperative. In 2006, I became a storekeeper for this cooperative. At that time, I noticed that promoters of husking units were coming from Bobo Dioulasso (more than 500 km from Bagré) to stock up on paddy. Before arriving on the Bagré plain, I used to trade: I bought the paddy and sold it in markets all over the country.”

The example of the promoters in Bobo-Dioulasso inspired Marcel to set up his own rice mill with a husking unit. In 2011, he started building the unit, in 2012 he acquired the equipment and in 2013 he completed the installation of the husking unit. Now, he sees a brighter future in paddy processing than in production: “Here the plots are not extensible, and even if you have the means you can't produce on more than one hectare. In addition, our means of production require a lot of physical effort. And as time passes, we can handle it less well. This is also the reason why I tried to diversify my activities.”

And indeed, business is going well for Marcel. His rice mill has a small capacity (2 tonnes of rice/day), and during the winter season he has difficulties producing in quantity because of the bad weather: “We don't have the infrastructure to allow drying in rainy weather”. For that reason, meeting the growing demand for rice is his biggest challenge. Marcel’s customers range from the National Society for the Management of Food Security Stocks in Burkina Faso (SONAGESS), the National Union of Rice Producers in Burkina Faso (UNPRB) for institutional purchases, and individual clients in Ouagadougou, Tenkodogo, Koupéla and Zabré. “Thanks to the Qualiriz project, we have further diversified our client base and the volumes demanded have increased. In the past, we only sold to a small number of partner distributors who imposed their prices and method of payment on us. With the project, the number of buyers has increased, prices are now more interesting and transactions are secured by contractual documents when it comes to selling or buying on credit.”

So Marcel is currently setting up a new unit with a larger capacity: 5 tonnes/hour. “It will allow me to husk the rice, calibrate it and bag it automatically; above all, it will allow me to offer larger quantities of rice to my customers.” 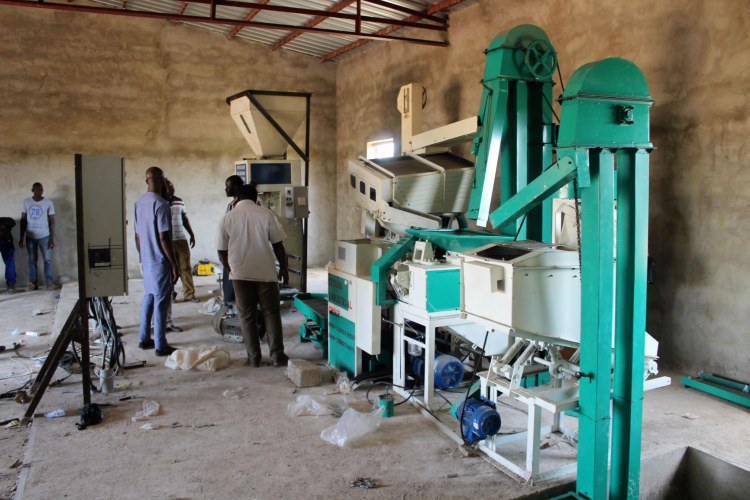 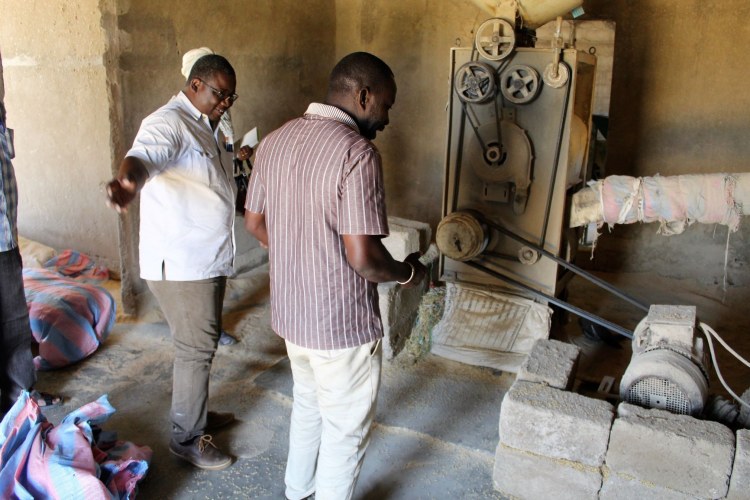 But to truly be able to offer larger quantities of rice, he is battling a lack of working capital to buy the necessary paddy. “We have no guarantee to present to the banks and benefit from the credit. Demand increased but we did not get the funds to collect the paddy in time. To top it off, Ghanaian, Beninese and Nigerian buyers came with cash to buy the paddy: they outbid each other, adding 10, 15 and sometimes even 25 FCFA/kg. They bought the paddy even when it was badly dried. Not having the same means, we suffered from this. The producers don't agree to deliver the paddy on credit. So when these bigger buyers came with cash, they left with all the paddy!”

When the producer comes to offer you his paddy, he will first deliver the equivalent of the credit you gave him. If you have enough cash to take more, he will deliver. If not, he will sell elsewhere because he needs cash. If the project can really help build trust with the banks, that would be ideal. It would give us easier access to credit with the banks. Today I work with CORIS Bank International: when I present a file to them, they tell me that they can see that my activity can be profitable, but I don't have sufficient security to take out a substantial loan.

Marcel has also seen some significant changes brought about by the project. “Producers have understood the importance of correct drying and sifting of paddy. The quality of the paddy has really improved: currently when paddy is processed, the colour is uniform. There are no more coloured grains (yellow, red) or rotten grains.” Similarly, a shift has taken place in terms of the collaboration with rice producers: the rice mill now works with formal contracts. This still means that the mill must be able to pay cash when producers deliver their paddy. 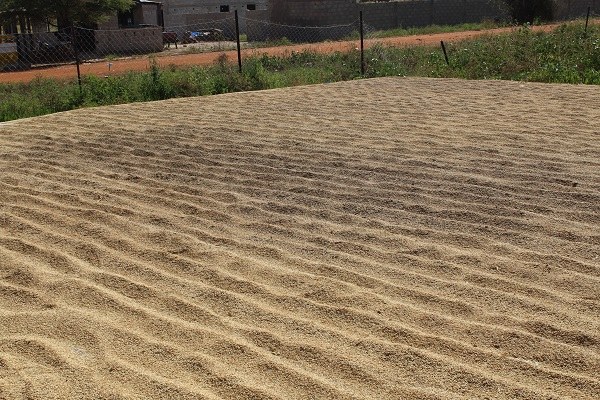 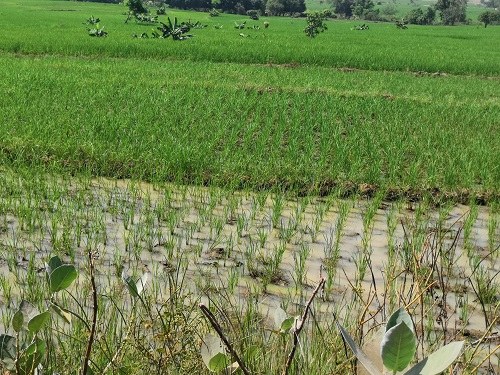 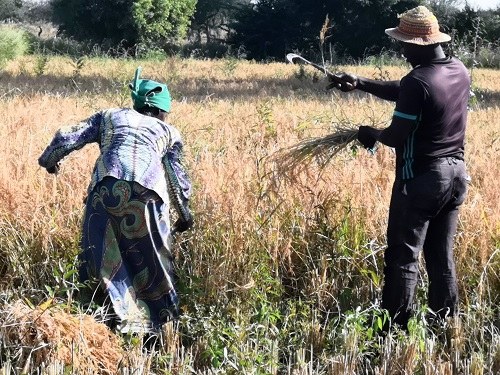 Lamoussa Zoure is the promoter of the Sanara Wend-Panga rice mill, located in the V2 village near Bagré. She has joined forces with Safoura Bancé, promoter of the Koumare rice mill for exchanges. Their customers come mainly from the region and institutional purchases.

Listening to these two women, they face the same problem of access to finance for paddy supply. However, they have been less fortunate than the Kaboré rice mill: they have both sold their largest volumes through institutional purchases. Payment after delivery came in late. This situation really weakened them. Lamoussa and Safoura also sell to some traders who refuse to sign formal contracts despite the actions of the project. 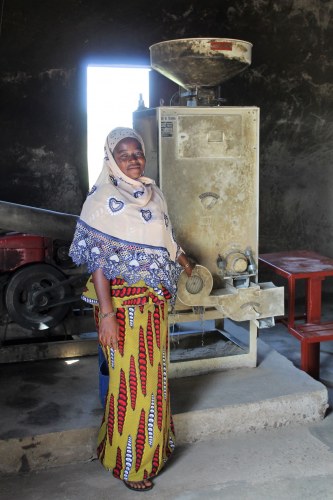 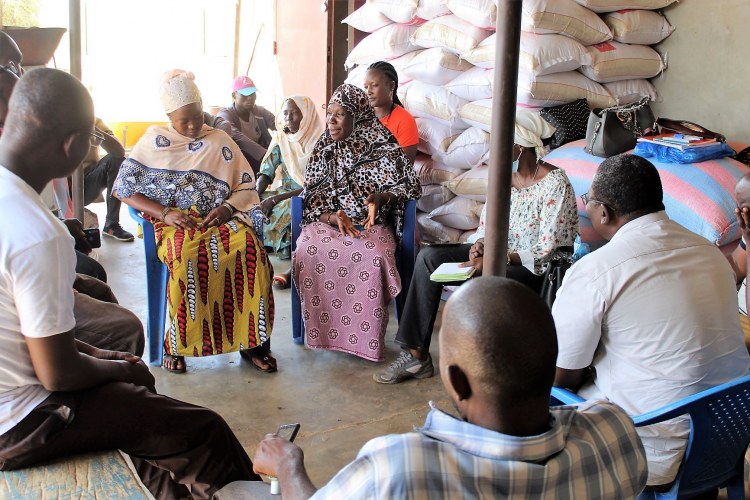 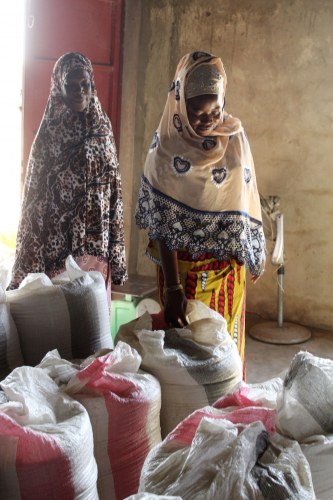 We participated in institutional purchases. We were supposed to receive our payments after two weeks. But we had to wait five months before we received our funds. It was so bad that we hid from the producers with whom we had taken the paddy. It wasn't easy. In the morning when you get up, you look for a place to go so you don't have to face pressure from your creditors. However, we are armed with the courage to continue our activity!

Thanks to the project, they had been able to enter into a formal contract with the Kumale cooperative of paddy producers in V3 near Bagré. Today, their greatest wish is to have the necessary funds for the harvest that will start soon.

Within two weeks the paddy will be available on the plain. Our wish is to have cash to acquire the paddy before the big foreign buyers take over the whole harvest as was the case last season.

The Qualiriz project runs for one more year, until 30 September 2021. Access to finance is an important aspect of the project.