A single look at the official ONC coffee statistics says it all. Coffee production in Congo is estimated to be 63,000 metric tons, while official exports in 2011/12 were 9,180 metric tons and in 2012/13 8,167 metric tons only. The people of Congo are not particularly known for their high domestic coffee consumption, so where is the difference going to? Nobody knows, or better, no one registers. Because everybody knows, of course, that huge amounts of coffee are smuggled across the borders and appear in the neighbouring countries’ statistics as local production. The Congolese producers in the border areas of the East of Congo are at the mercy of illicit buyers and quality is not remunerated. So it is no surprise at all that the official Congolese coffee export plummeted from the historical record export of over 130,000 metric tons in the mid-eighties down to only a little over 6% of this today.

The revival of the Congolese coffee sector starts with the reconstruction of the farmers’ capacity to produce top quality coffee and their ability to connect to the world market. The Congolese representation VECO-DR Congo of the Belgian NGO Vredeseilanden is launching, from its base in Butembo, a major programme to contribute to this ambitious objective. With the support of the Common Fund for Commodities (CFC) and the International Coffee Organisation(ICO), as well as the Belgian government DGD and the Dutch organisation Cordaid, the programme covers a period of 4 years (2014-2017), as a scaling-up of the concept development phase of 2013 supported by Cordaid. 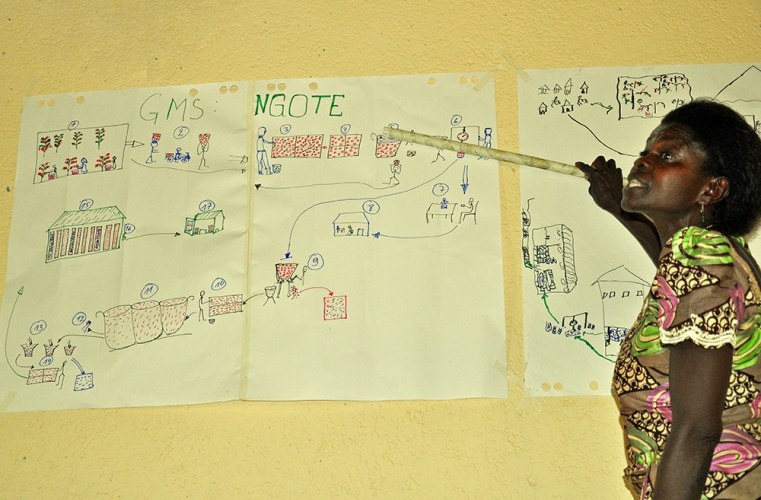 During this pilot phase, the programme tested the concept of a micro-washing station, designed by Andy Carlton, an expert on smallholder coffee production in cooperatives with 20 years of experience in countries like Rwanda, Malawi, Burundi, Tanzania, Kenya and Uganda. As a result, the first 17 micro washing stations are currently under construction and will start operating in the months to come.

The basic principles of the programme are all inspired by the need to ensure sustainability from the very start of the programme. Each micro washing station will be owned by a group of at least 100 smallholder coffee producers, contributing each 50$. Since the cost of building and equipping the washing station is about 10,000$, the other 5,000$ will be provided in the form of UV-resistant roofing materials for the drying shed, shade-net, coffee tray wire, chicken wire, fermentation tanks, a weighing scale, a moisture meter and a mini-eco-pulping machine with a capacity of 1.2 metric tons of cherries an hour. The value of these investments will be reimbursed to the central cooperative of the washing stations, over a period depending on the coffee market conditions: better prices will shorten the reimbursement period. The revolving loan fund will help new micro washing stations groups to be established in the future.

The management committee of each micro washing stations takes part in a participatory training workshop, where a manual of procedures is drawn in pictures by themselves, allowing to pass on the coffee treatment methods for high quality to the whole group, even to illiterate people. Together they design the forms needed for transparent management of their members’ coffee. The programme will support them for printing these in large quantities.

VECO, on top of coordinating the field implementation of the programme, will also broker relationships with buyers of quality coffee worldwide, until these will be sufficiently strong, allowing VECO to phase out. The high quality of the micro-station washed coffee will attract specialty coffee buyers from all over the world, although the first couple of years may be a little difficult as coffee from Eastern Congo will need some time to establish a strong reputation on the world market.

The far better prices farmers will obtain from quality coffee buyers will boost coffee production considerably. The programme anticipates this increase of interest by preparing already from the start the production and dissemination of at least 3 million coffee seedlings of well adapted varieties in close cooperation with the ONC (Office National du Café, the national coffee board) and INERA, the national agricultural research institute. Good agricultural practises will also be promoted, including agroforestry with shade trees.

A major challenge for the programme will be to mobilize the capital needed for buying the cherries at micro washing station level and for conditioning the coffee for export by the cooperatives. Money lending institutions of all kinds are still reluctant to engage in the Congo, fearing high insecurity and corruption levels, hence not yet seeing the huge opportunities offered by the revival of the coffee sector. Another challenge ahead will be to convince the DRC authorities to harmonise the coffee tax regimes with the neighbouring countries, so as to discourage smuggling. Today tax rates in Rwanda and Uganda amount to more or less 1.5% of the FOB (Freight on board) value, against more than 10% in the DR Congo. Through a dramatic increase of the quantity of exported coffee, the State will remain assured of considerable income from the coffee sector.

Whatever direction coffee prices will take on the world market, the implementation of this program will enable smallholder farmers in Eastern Congo to get far better prices than those obtained today. The leverage of this approach on the livelihood of tens of thousands of farming families, as well as on the sustainability of high quality Arabica coffee production, will be unprecedented. Their increased income will be a clear peace dividend and at the same time appeal to the youth as a better alternative than joining rebel groups. CFC/ICO and other donors combining their strengths with VECO-DR Congo, ONC and INERA, will definitely have a historical impact on the sector’s future.