in News
High quality Peruvian cocoa for fine chocolates
This news is part of the following focus area:

San Martín de Pangoa is a Peruvian town located in the Junín region, province of Satipo, about 12 hours by car from the capital City Lima. Unlike Lima’s cold weather, Pangoa is embraced by the heat of the wild Amazon jungle and the greenery of its almost infinite forest.

The first inhabitants who occupied the territory of the province of Satipo were the Asháninka, Nomatsiguenga and the Kakínte, all belonging to the ARAWAK family. They all lived a collective way of life, whose origins date back to 3000 years ago. Their ancestral territory, the tropical forest and its biodiversity in flora and fauna, are very much interlinked and reflected in their customs according to their view of the world.

Their way of living is combined with the management of the territory and the usufruct of their natural resources: collective, horizontal and dynamic. Among the main economic activities carried out in Pangoa, alternating with a thriving trade, are the production of coffee and cocoa.

Cocoa "natipo", meaning native of Pangoa, are fine grains with a distinctive aroma of the highest quality. They have been recognized by international organisations, such as the renowned Paris Chocolate Salon, generating a high demand from the Swiss, Belgian and French, all seduced by its fruity, wood and honey aromas, which permeate the exclusive chocolate bars made with native cocoa. 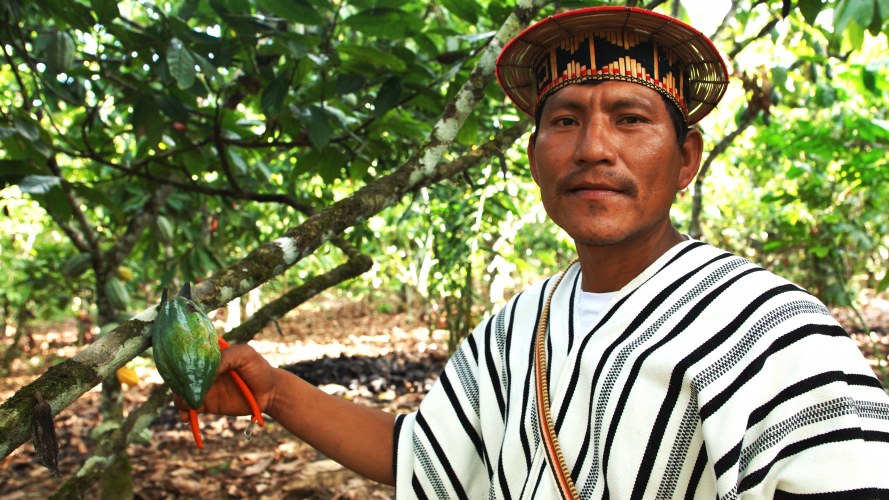 During our visit we were able to get a taste of the local experience through Lenin Chimanka. An Ashaninka indigenous producer, from the Junín area, who inherited from his father a farm with native cocoa crops. Lenin dressed to the nines, in the typical Cushma suit, -which took his wife about 3 months to prepare on a loom,-he agreed to take us on a tour of the agroforestry system he has established. He showed us meter by meter, the distribution of his farm, embodied in a plan with the clarity and precision of a checkerboard. Lenin alternates musaceae, fruit trees and high value timber, combined with improved native cocoa of high productivity due to his agroforestry design.

“You walk one, two, three meters, here I have a fruit tree, a citrus tree and a soursop tree. Now you move one meter and you find native cocoa, you walk towards here and three yards from here I have timber”, in total the farm comprises 1,300 native plants per hectare, which successively will provide income for his family, first the Musaceae for two years, while fruit and cocoa trees grow and give way to their perennial production in approximately four years and for the next 40. 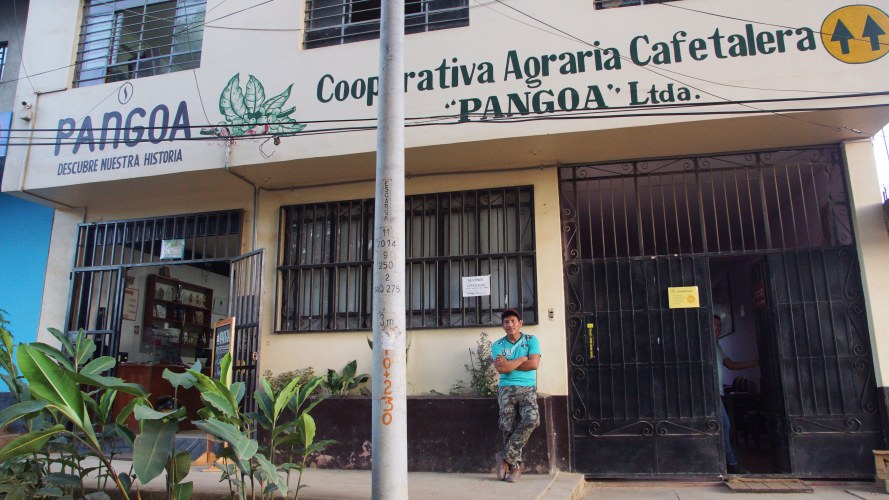 The organic cocoa that Lenin already produces from areas with traditional management and that derived from the new established plots of land, he will be able to sell it through the Pangoa cooperative, of which he is a partner through a type of inherited membership.

His father has sold coffee and cocoa since all his life to the cooperative and today Lenin, follows the family tradition, with the same love for the land, to which he added innovative methods of environmentally friendly production.

Esperanza Dionisio, the General Manager of Cooperative Pangoa, has been in charge of the organization's leadership for more than two decades and was the first woman to assume the management of a cooperative organization in Peru, exercising a role that is normally performed? by men.

With Dionisio at the helm, the cooperative has grown and diversified its revenue. The role of women in the production and transformation of coffee and cocoa has been one of the aspects that has characterized her management with an inclusive vision. 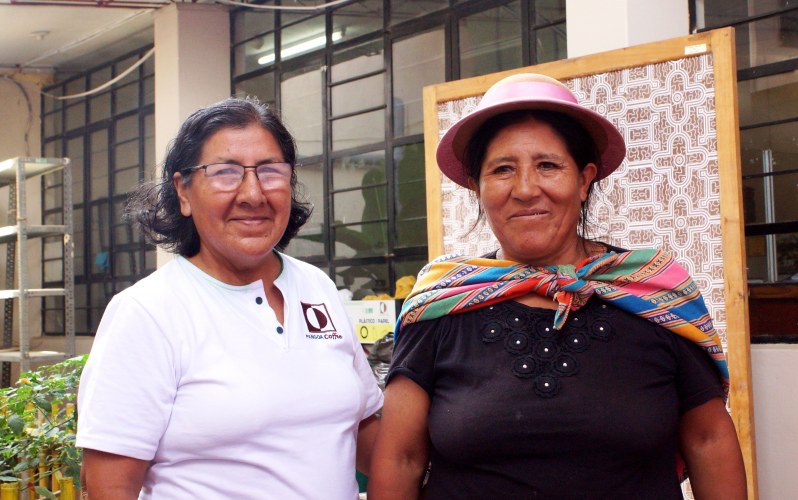 “It is part of our vision that equality extends respect for rural women, from their vision and capacity,” explains Dionisio. To do this, together with Rikolto and other organisations, a series of workshops and trainings have been developed that cover not only business management, but also aspects related to self-esteem and gender equality that allow women to offer their best potential for the service of the community.

In 2019, Pangoa has once again placed itself on the list of the world's most exquisite cocoas. The Paris Chocolate Salon has traced its name in the list of the 50 most exclusive shows. The taste of the Peruvian Amazon has roared again.

Note: I want to thank the support and warmth of the Chimanka family, Esperanza Dionisio, my colleague Teofilo, and all who work in the cooperative. “It is said that the term Pangoa comes from the “ashaninka”, Pangá, name taken from the river that crosses the area, another similar meaning is that of pangotsi or house; these distinguished from others because people were kind, so when talking about the pangotsi one assumed that he was or should feel at home ”, I felt that way. 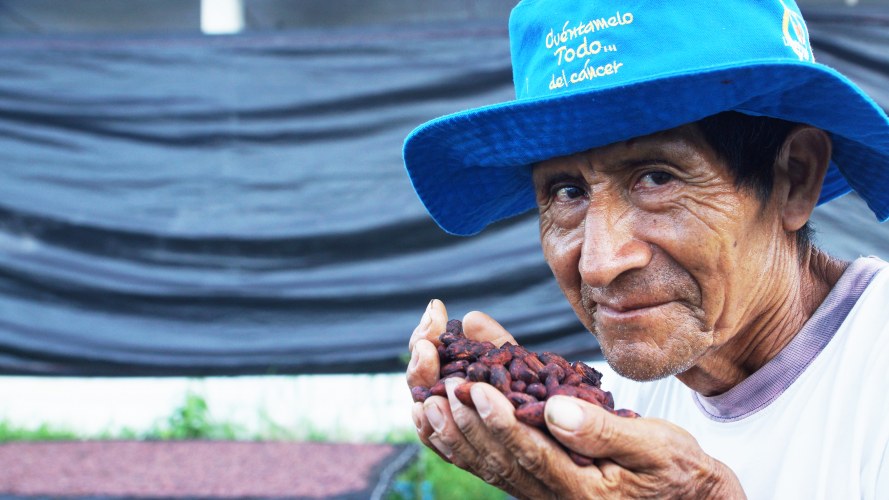 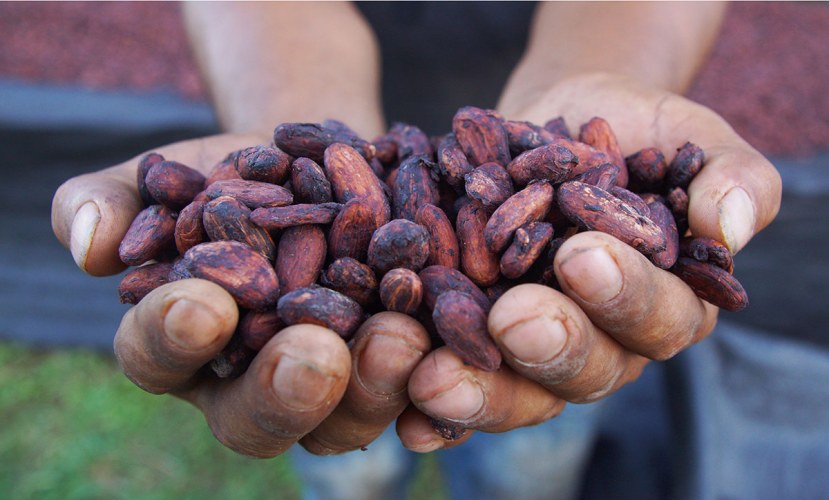 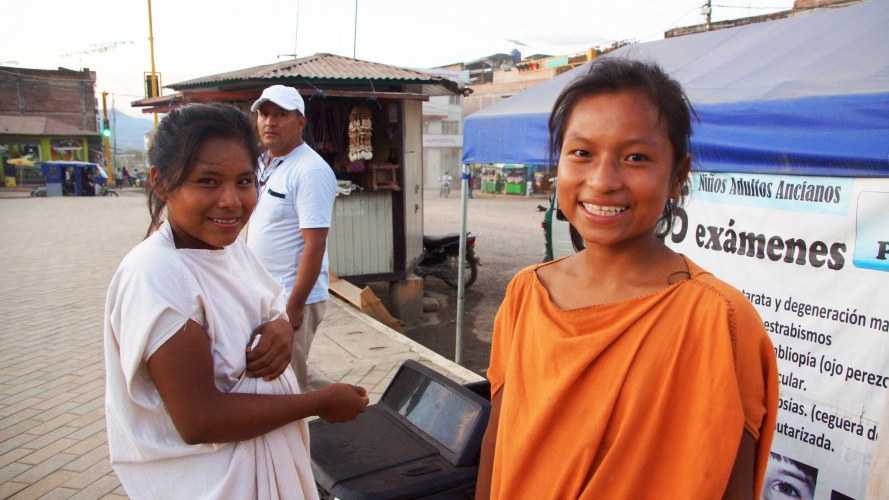