Saturday 30 January 2016 was a big day for VECO Vietnam! The team organized an event at the Vietnamese Women's Museum in Hanoi to launch their innovative Safe & Organic Food Finder (SOFF) platform and to hold a stakeholder dialogue on the Participatory Guarantee System (PGS). During the dialogue they also presented a new video and a photo exhibition on PGS.

Vietnam has a major food safety problem. Not a week goes by without a newspaper running an article that uncovers a new food safety scandal. These frequent scandals have many different causes, but one of the main issues is this: toxic, banned pesticides and synthetic fertilizers are smuggled across Vietnam’s porous border with China to be sold at local markets at very low prices. The Vietnamese government has an extensive list of allowed, restricted and banned agricultural chemicals, but the porous border makes the list hard to enforce.

Add to that the fact that most Vietnamese farmers are poor smallholder farmers that tend plots of land smaller than 1 hectare. Farming is often just one of the family’s income streams: most families also make a living raising animals, producing handicrafts or as part time laborers in factories. These smallholder farmers often have a hard time accessing accurate information on how to safely use and store the agricultural chemicals (whether they are allowed or banned) they buy in their local markets. The seller might have given them instructions, but most farmers spray their produce liberally, just to be sure that their harvest won’t be spoiled by a stubborn pest. The result is that a lot of the vegetables that make it to market have unacceptably high levels of chemical residues. This explains why the issue of food safety keeps many Vietnamese consumer awake at night.

VECO Vietnam works to help resolve these problems. During the event at the Vietnamese Women’s Museum, the team presented showcased two potential ways to make an impact.

The first way was the launch of the SOFF platform, the Safe & Organic Food Finder. This innovative platform, supported by Vredeseilanden’s Innovation Fund, helps consumers in Hanoi find stores that sell safe and organic vegetables.

The number of farmer groups in Vietnam that grow safe and organic vegetables is growing steadily, hand in hand with the Vietnamese consumer’s increasing appetite for these kinds of vegetables. VECO Vietnam supports a number of these farmer groups through their projects. There are at least almost a hundred stores in Hanoi that sell vegetables of these kinds. However, and oddly enough, research shows that only 4% of all vegetables consumed in Hanoi in any given day are safe or organic. In other words: there is a lot of demand for safe and organic vegetables, there is a lot of supply, but both sides don’t seem to be finding each other. VECO Vietnam calls this the food safety paradox.

Having combed Hanoi's streets for stores that sell safe and organic vegetables, VECO Vietnam built a platform that includes a website and an Android and iPhone app.

Thanks to SOFF, families will be able to buy their groceries at reliable stores, the stores will increase their sales and farmers that specialize in safe and organic vegetables will earn a better income.

You can download the SOFF app by searching for ‘Safe & Organic Food Finder’ in your phone’s app store. You can use SOFF's website version by surfing to www.soff.asia.

After the launch of the Safe & Organic Food Finder app, farmers, government officials, consumers and VECO Vietnam staff engaged in a constructive dialogue on the Participatory Guarantee System (PGS). During the dialogue, VECO Vietnam's new PGS video was unveiled.

Why is PGS so important? Well, an essential aspect of producing safe and organic vegetables is certification: The Vietnamese government has implemented VietGAP as the official certification system. Farmers that want to produce VietGAP-certified vegetables go through a thorough process to ensure that their produce comply with VietGAP standards. Part of the process is a costly audit by an external certification company.

In practice, due to its cost and complexity, smallholder farmers are excluded from VietGAP certification. This means that, even if their produce is safe or organic, they cannot sell it as such as they are not certified.

VECO Vietnam proposes an alternative system: PGS, the Participatory Guarantee System. PGS is a quality assurance system that is feasible for smallholders: it does not involve costly external certification and the paperwork requirements are easier to manage. One major advantage of PGS is its certification system: in VietGAP, farmers are audited once by an external company. If they pass the audit they receive their certificate. In PGS, a group of different stakeholders comes together on a regular basis to inspect a farmer’s production process. The stakeholders include government officials, retailers, consumers and other farmers. If the farmer complies with the standards for safe or organic vegetable production, the produce is certified safe or organic and can be sold as such in shops.

VECO Vietnam has produced a new video that provides more information on how PGS works and on how it’s being applied in Trac Van District in Ha Nam Province, one of VECO Vietnam’s project locations. Have a look at the new video below!

The dialogue and video were followed by a tasty traditional Vietnamese lunch. Participants then visited the opening of a two-day photo exhibition on the practice of PGS, hosted at the Vietnamese Women’s Museum. More than fifty photos showed the different steps involved in making PGS work.

A lot of steps are involved in making PGS work and still more are needed to definitively resolve Vietnam's food safety issues. However, during this event at least some strides were taken in the right direction. 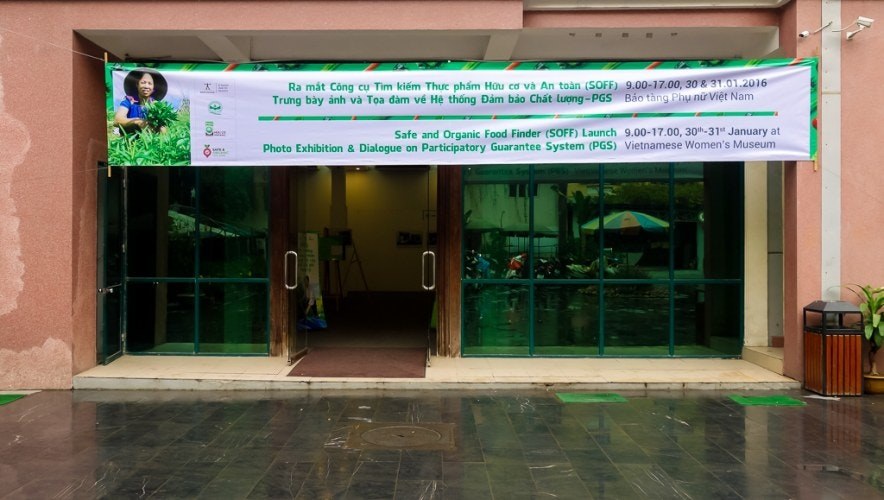 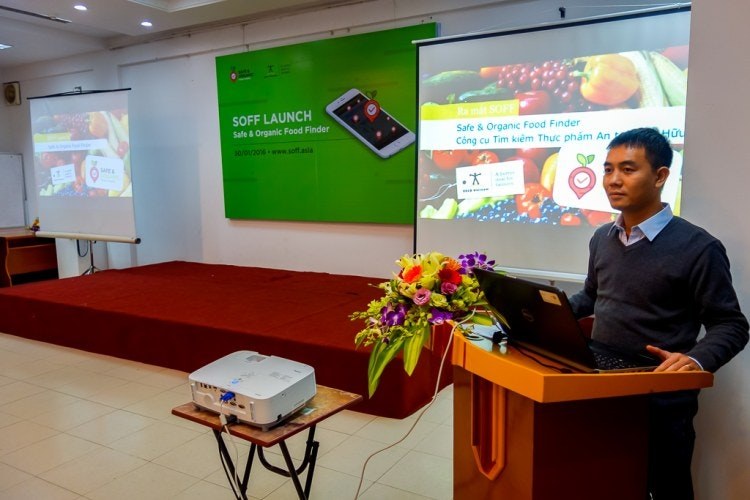 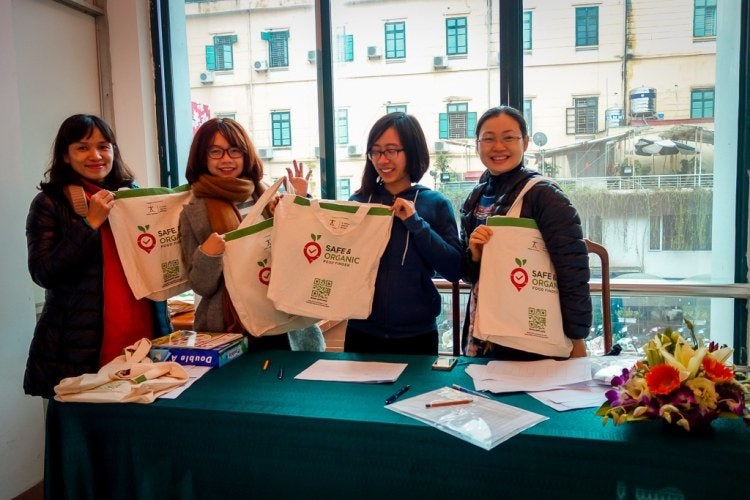 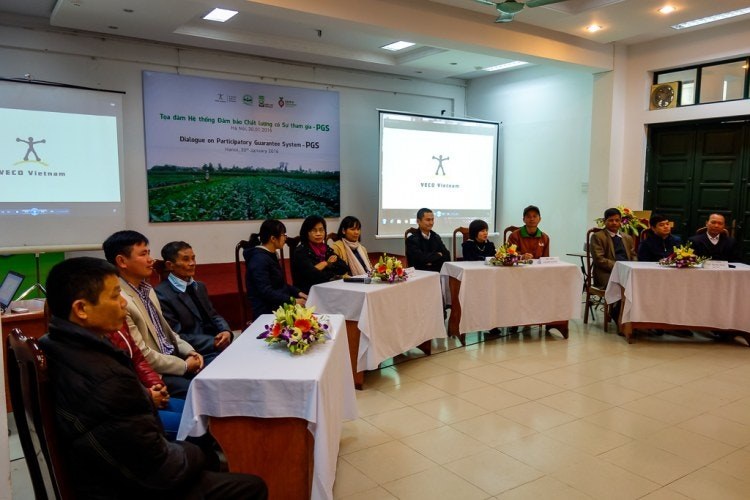 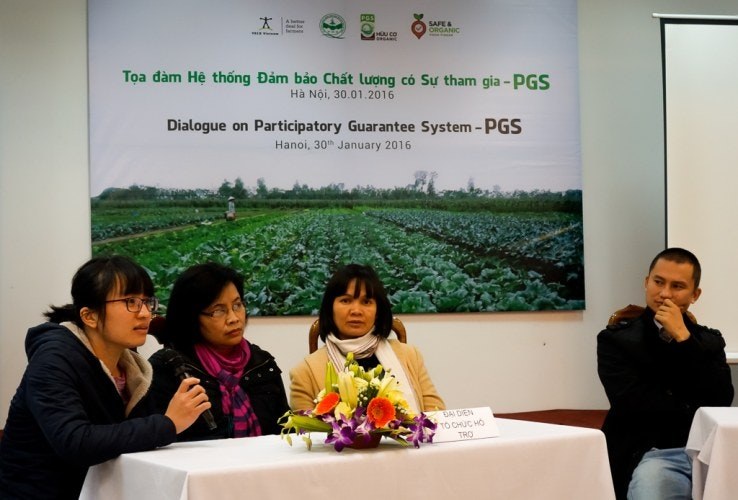 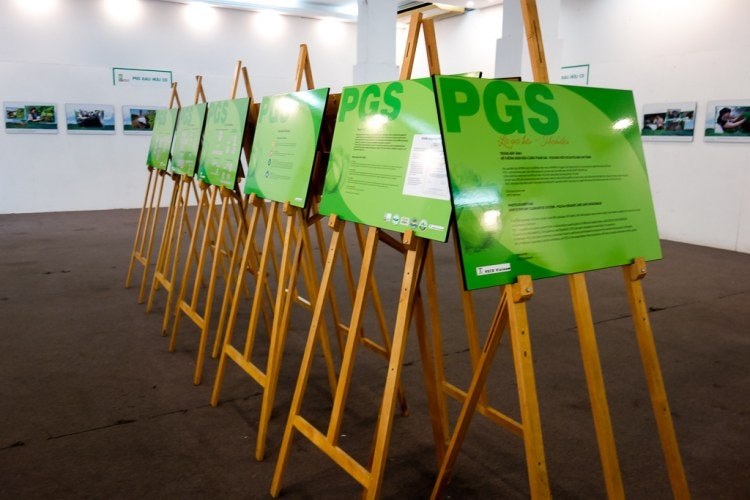 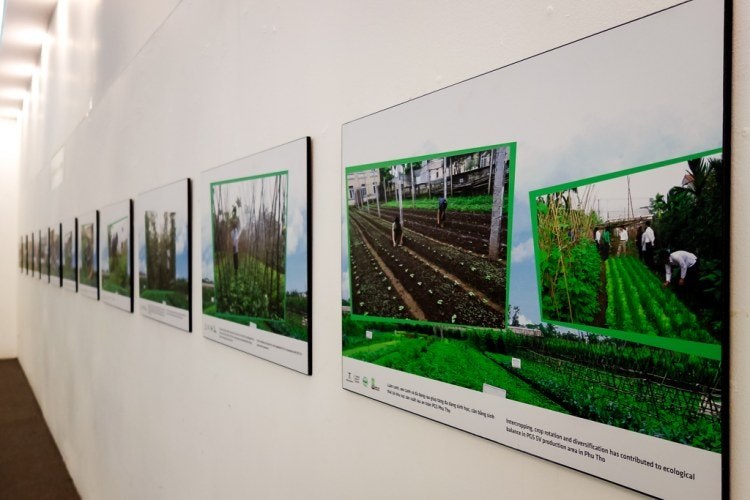