240 delegates from 20 countries across Europe and worldwide, including the US, Japan, Libanon, Ghana, Colombia, … gathered in Bristol during the weekend of 3, 4 and 5 july to attend the 9th international FairtradeTowns conference.

Bristol is the “European Green Capital” of 2015. Therefore, the core subject of the conference was Fair Trade as part of a sustainable society. A short film ‘How green is Fair Trade?’ was produced for the occasion.

The participants were welcomed on Friday in The Create Center, a centre housing several environmental organisations. They regularly organize events and expositions concerning ecology and sustainability. After an opening speech by Jenny Foster, Bristol’s fair trade coordinator, followed a few short presentations, concluding with a network supper in the evening so that participants could get to know each other..

On Saturday, Fatima Ismael, environmental expert from the FairTrade Coffee Cooperative Soppexcca in Nicaragua opened the conference by reflecting sharply on the negative impact of climate change on the coffee harvest and how it threatens the livelihood of millions of farmers in the South.

Harriet Lamb, CEO of Fairtrade International, explained how her organisation cooperates with farmers to mitigate the negative effects of climate change and how farmers can reverse these effects by choosing sustainable farming practices.

Their inspiring speeches were followed by a few case studies illustrating the importance of Fair Trade for both producers, companies (such as Marks&Spencer) and governments. In the afternoon, several workshops took place.

Katharina Beelen, responsible for sustainable catering at Vredeseilanden, organised a workshop on the link between Fair Trade and Sustainable Food. Within the Flemish FairTrade Campaign, this link is clearly visible in the 6th criterion that Vredeseilanden added to the 5 international criteria. Ever since, a growing number of countries incorporates this 6th criterion. Due to great success, the FairTradetowns conference decided to organize a second workshop on Sunday.

George Ferguson, the mayor of Bristol, and 2 mayors from Lebanon closed the conference on Sunday. The 2 Lebanese mayors recently inaugurated the 2 first FairTradeTowns in their country.

The mayors were the first to sign the ‘Bristol-resolution’, committing themselves to actively support Fair Trade as part of the UN Sustainable Development Goals that will be launched in September. With their signature, they call all mayors worldwide to do the same.

The 10th Conference will probably take place in Beiroet (Libanon). Meanwhile, the city of Bruges (Belgium) has proposed to host the conference in 2018. 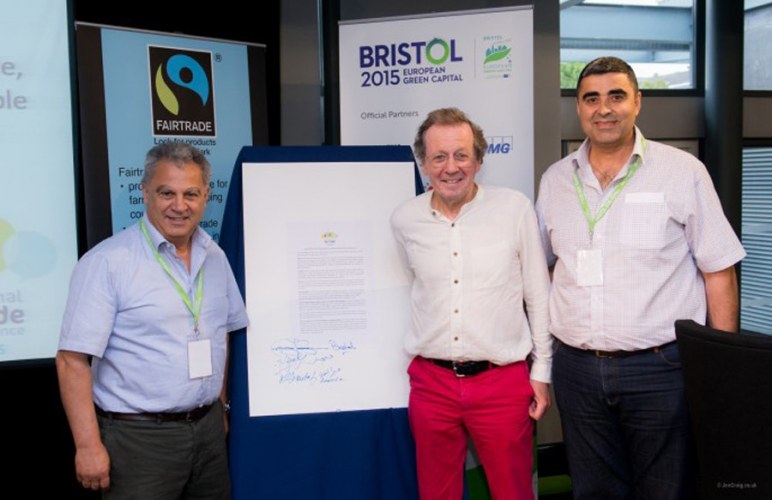