in Insights
Speciality coffee from Kivu and Ituri, DRC
This news is part of the following focus area:

The 12th high feast of African coffees ended on february 14. Every year the African Fine Coffees Association (AFCA) organizes a conference and exposition in the capital of one of its 11 member countries. Until recently it was an association of East African coffees, but because 90% of the African coffee comes from the East, they have opted for a continental profile. Thanks to the investments of CFC/ICO, Cordaid and DGD, the cooperatives supported by VECO managed to cause a stir on the exposition.

Some thousand people from all over the world attended the conference. Though Kenya's president, Uhuru Kenyatta, who did not consider the event as sufficiently important, was conspicuous by his absence. But maybe he did not show up because during the last years Kenya's production dropped considerably, from 60.000 to 40.000 tons of coffee.

The main message of the conference is good news for Africa. Because of climate change in Brazil the yield was a bit disappointing there, and the drought will still have an adverse effect on the 2016 yield because of less flowering. So there is a window of opportunity for African coffee. For the first time a lot of buyers will be looking to Africa in search of gourmet coffees. And if the first contacts go well, they will undoubtedly turn into long lasting market relations, as both the growing population and the increasing appetite for a nice cup that cheers in the middle-income countries ensure an enduring 3% annual increase of demand.

So this is good news for the African coffee farmer. Even if he is still very much unaware of the possible effects of the climate change on African coffee. Here maybe more shocks can be expected. This should urgently be studied thoroughly for a country like Congo, lest new plantations, which anyway should last a few decades, be located in the wrong places.

Congo in the spotlight

For Congo this important coffee event was a great success. Last year, on the 11th Conference in Bujumbura, I expressed my surprise about the fact that Congo did not have a booth of its own in the exposition hall, and apparently had never had one. This time I had made an appeal to all members of the Congo chapter of the AFCA to share the high cost of rent for a booth. Our president had taken this to heart very much, and had also ensured that the AFCA secretariat agreed to this. Even if not every single Congo member had paid his contribution, the booth was there and attracted a lot of visitors. Those were even more looking forward to the Congo coffee cupping that was organized in the morning of the last day (Valentine's Day). In January the annual competition Taste of Harvest took place in Kampala. The coffee producers of every AFCA member state compete there for the best quality and for the 5 winners of each country a taste is organized on the exposition. 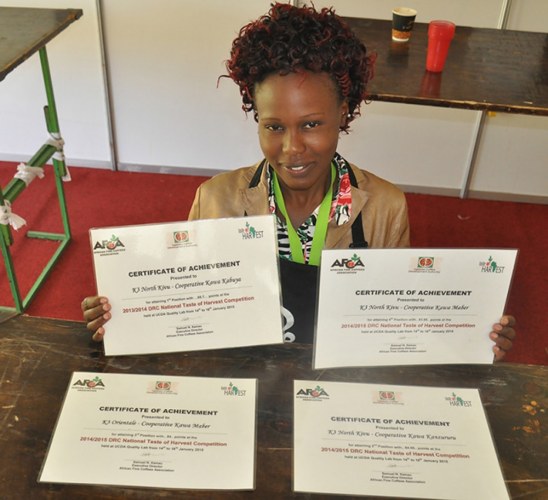 Congo had submitted 17 samples. A record. Seven of those came from three young coffee cooperatives which Vredeseilanden is supporting. They were only created in June/July last year and this was there very first season. To everybody's great surprise “our” co-ops had produced the four best Congolese coffees. And we obtained scores higher than 85%. For Congo a “never seen”. For the first time since the creation of AFCA the jury has spoken about Congolese coffee in very laudatory wordings. This also is a historic breakthrough. The older generation of buyers is not surprised about this. They still remember very well the intrinsic qualities of the coffee from Congo in the 80s, before the great implosion.

But also our approach causes surprise. Two years ago, when we developed our coffee program, some major figures in the coffee sector stuck to the claim that it was absolutely impossible that small family farmers could produce top quality gourmet coffees. Today it has been proved that it is possible. By decentralizing a standardized coffee treatment in micro-washing stations, in which the farmers have invested themselves and which they manage themselves. All stations together then create a cooperative which is responsible for sales and export. As a preparation for the AFCA Conference we made a short report which illustrates our approach.

Now that our goals of quality improvement have been fully realized and have contributed to a renewed interest in coffee from Congo, we together with the cooperatives are faced with our second major challenge: increasing volume considerably without compromising quality. Demand and interest of buyers is now guaranteed. Demand for gourmet coffees is much higher than current supply. In a few weeks the first container leaves from Ituri to the USA. A Korean buyer even proposed to sell the top coffee per bag and to transport it by plane. The best coffee is treated like gold. Then there is no talk about the New York coffee market price with all its capricious fluctuations. The gourmet coffee market segment has its own logic which is based on a fixed high price.

Now, with the certificates of quality coffee in our hands, we should convince buyers and creditors to timely provide sufficient operational capital. The recurring request for a three-year track record can still not be met. That is something that we cannot change. But I strongly feel that there are clever people among them, who will quickly understand the gigantic potential of these coffee cooperatives, and who will be willing to deviate from the usual harsh conditions.

This year also I launched a couple of new challenges in the final meeting of our Congo chapter: from next year onward we must organize the Taste of Harvest Competition for Congo in Congo itself, and no longer in neighboring country Uganda. In itself this is an important political statement. And we must start thinking about organizing, in a few years, the AFCA Conference in Congo itself! Not in Kinshasa but in Goma! That will ensure the definitive resurgence of Congo as a fully fledged world-class coffee country.