From drinkable money to exquisite chocolate

From drinkable money to exquisite chocolate

Why VECO is working to connect small cocoa producers in Central America to small chocolatiers in Europe.

We do not tell you anything new if we say cocoa is scarce. Consumption of this delicious brown bittersweet product, called chocolate, is rising around the globe. Here in Nicaragua cocoa is hot. Everybody is interested in it; everybody wants to invest in cocoa, from producers to development agencies, government and private sector actors. But how should these investments be oriented? Which strategy should Nicaragua choose to take advantage of its potential and ensure a decent living for the 10.000 cocoa producers in the country? That is the question. At VECO MA, we, together with our partners and cocoa producers, hope to have part of the answer.

Cocoa is as old as the history of Central America. The Mayas made a bitter drink of it, which they offered to Christopher Columbus upon his arrival although he did not seem to be very impressed by the taste. Cocoa was also used as money in Nicaragua and thus became the only drinkable money in the world.

The potential of cocoa in Nicaragua is enormous: an estimated 350.000 ha are suitable for cocoa production. Moreover, the quality of the cocoa in Nicaragua is excellent. And with the right strategy it could be a major asset of the country. The fine taste of nuts, flowers or fruits (thanks to its creole variety) makes the cocoa potentially a very high value product on the international market. If the cocoa market is booming, the specialty market (for gourmet and fine cocoa) is booming even more, growing at a rate between 12 to 16 % per year, worth around 200 millions USD. 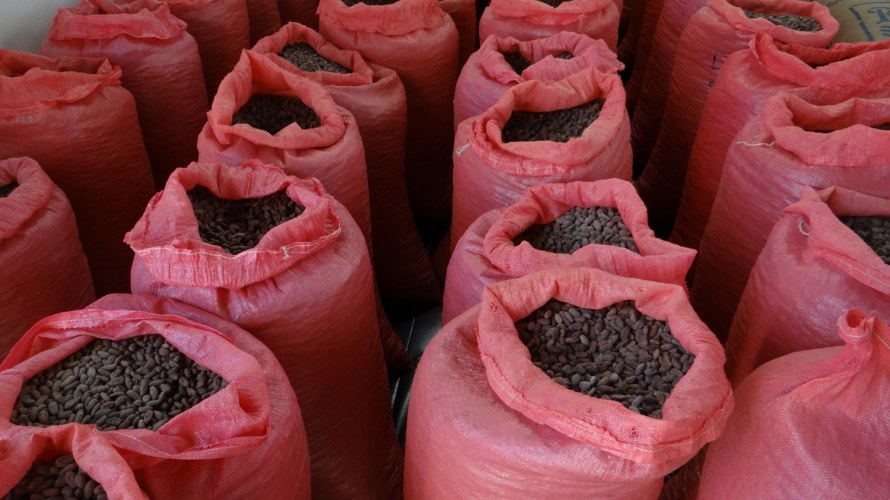 Given the characteristics of the cocoa sector in Nicaragua (a lot of smallholder producers that are producing in an agro-ecological way, the creole variety that generates a fine cocoa) we think it is a wise strategy for Nicaragua to concentrate – at least partly- on that high end, fine cocoa market. From a cost and productivity perspective Nicaragua is not able to compete with the big scale cocoa production in Africa, currently supplying 80% of cocoa worldwide at a very low cost. A focus on competition with African cocoa would not be desirable either. Cheap cocoa production comes with a lot of negative externalities such as child labour and environmental degradation.

Nicaragua would be far better off by focusing on preserving its fine cocoa variety and increasing production under the current system of agro-forestry by supporting smallholders to organize themselves and increase their cocoa production and the quality of the processing of cocoa. Although the yields within this system are lower (although there is still a big margin for increase), the price paid for high quality cocoa is better. Within this strategy, the fact that the smallholders produce relative low quantities, is no longer a limitation. On the contrary, there is a triple win: higher incomes for the producers, preservation of the environment and high quality cocoa becomes available for the buyers.

At first sight, most Nicaraguan cocoa actors share our vision because in 2013 they have been halting experiments with full sun cocoa. Full sun cocoa, requires much more (chemical) inputs and requires trees to be renewed much more often, due to high solar radiation, thus increasing the costs of production.

In Veco Mesoamerica we are focusing on increasing productivity of fine cocoa (amongst others through the promotion of graft) but at the same time we focus on positioning the cocoa of Nicaragua as a fine cocoa. Hence we are investing in the establishment of AMACACAO, a regional platform for the promotion of fine cocoa, which is lobbying ICCO, the international cocoa organization to recognize Nicaragua as a producer of fine cocoa. We work on the ground but also at a higher level, to secure long lasting changes and higher impact. We are also investing in connecting two worlds: the many but small cocoa producers to the many but small chocolatiers in Europe. Both sides of the chain are for the moment being fairly disorganized but the potential win-win that could emerge from establishing an inclusive trading relationship is enormous. And that is what we are ultimately aiming at.