A diversified agroforestry system saved a cocoa-producing farm from being wiped out by Hurricanes Iota and Eta in Nicaragua when trees of different species protected the cocoa plants from winds of up to 260 kilometres per hour.

Tininiska means hummingbird in the indigenous Miskito language. In Waslala, a municipality on the Northern Caribbean Coast of Nicaragua, 241 kilometres from the capital city, Managua, you will find the "Tininiska" farm – a tribute to the roots of its owner, Doña María Eufemia Woo.

It is now mid-November, and we find Maria cutting cocoa, which is something she does every two weeks, "I take out at least 160 pounds of cocoa slime and up to 700-800 pounds per cut," she says. This is despite the 36 hours of rain during the category 5 hurricane Iota, which is the second hurricane to have hit the country in less than 12 days.

To date, it is predicted that many cocoa-producing families in the region will lose 40% of their cocoa crop by 2021 as they are hit hard by the winds. 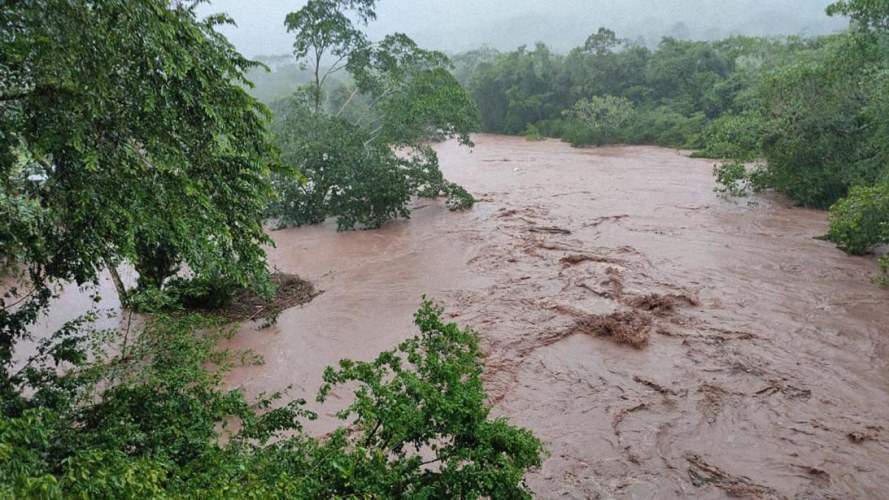 To date, it is predicted that many cocoa-producing families in the region will lose 40% of their cocoa crop by 2021 as they are hit hard by the winds.

Maria Eufemia has a demonstration cocoa plot under agroforestry systems since July 2019, thanks to the technical support of the company EXPASA and the project for Knowledge Management of the Cocoa Value Chain in Central America implemented by Rikolto with funds from the Swiss Development Cooperation Agency (SDC).

"In the face of the disaster caused by the two hurricanes (Eta and Iota), having cocoa agroforestry systems was a great advantage because the living barriers I have with the forest and fruit trees stopped the wind effect on the cocoa and served as a curtain to prevent the damage seen in other plots," says Maria.

“In my plot, only 37 cocoa trees were affected, because other trees fell on them, and the rest of the 5,500 cocoa plants are intact. The forest and fruit trees stopped the wind”, she reiterates.

Also, through this model, she has an economic advantage because she is harvesting different crops. For example, she says, the Musaceae, for instance avocados and citrus fruits, produce fruit permanently after nine months of development.

The producer is in the process of renewing the cocoa for better productivity. "When we have grafted plants, the production is faster, the handling is easier because we don't have to go looking for how to reach high fruits. Instead, we have to bend down to reach the fruits," she says.

María Eufemia comments that part of her plot is being transformed from scratch. In the beginning, there wasn’t even a bush, and now it is an area of cocoa grafted with different clones. 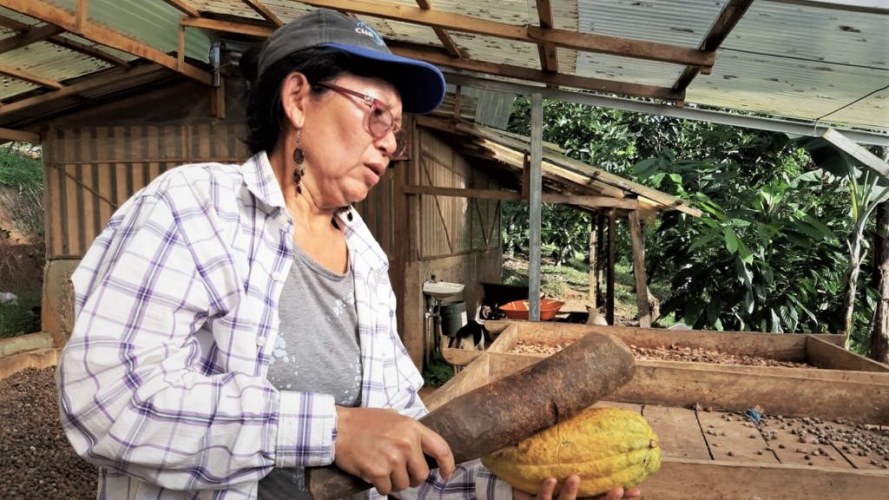 Making her own organic fertilizer

Maria Eufemia carries out exemplary maintenance of her cocoa fields. She has regulated the shade for all the trees, and manages them permanently through cleaning, pruning, and fertilisation with organic elements.

She makes her own organic fertilizer, using the remaining by-products of the cocoa and reusing them to make compost.

When she opens the cocoa pod, she extracts the seed and accumulates all the shells, adding in lime and ashes. These shells are then used to make compost by mixing it with soil, cow dung, chicken manure, rice husks, and other inputs.

She tells us that she is now planning to innovate and experiment by collecting the cocoa slime when it is fermenting and using it as a herbicide. "Once the cocoa slime gets processed, it kills any weeds, and this would alleviate the problem of labour for machete-cleaning the weeds," she says.

Maria Eufemia is innovating and creating more added value to her cocoa production with the family enterprise "Tininiska: Artisanal Chocolate", where she is commercialising cocoa products in different presentations, for example with artisanal chocolate bars.

Although they have a product that is being requested in niche markets in the United States, due to a lack of resources and larger equipment that would allow them to increase cocoa paste production, they have not been able to respond to this demand. "My processing equipment is still too small for processing such quantities," she says. 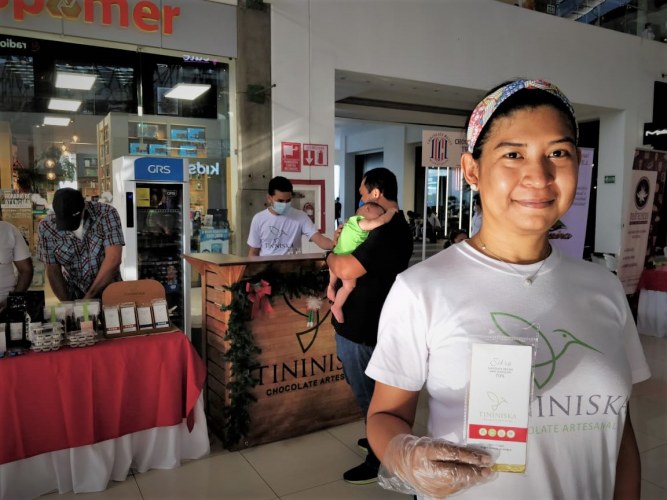 Tania Woo, is the daughter of Maria Eufemia. She is in charge of the marketing of the products of Tininiska, 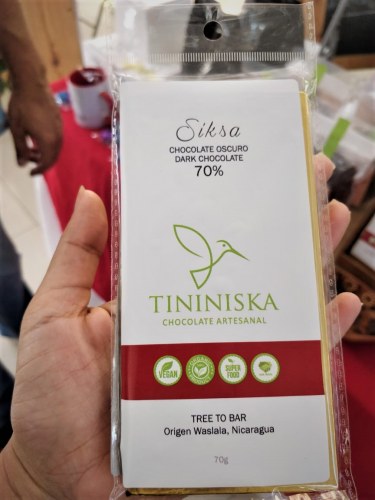 "Siksa", means dark in Miskito language, all products from Tininiska are named in Maria's mother tongue.

In the next 4 years the project focuses on documenting, validating and /or disseminating evidences of the application of agroforestry systems, and also, promoting governance at national and regional level, through strengthened multi-actor platforms, and facilitating the construction of policies and strategies aimed at increased competitiveness for cocoa in a sustainable and climate-smart way.