On the island of Flores in Indonesia, farmers have been producing coffee for export for generations. But as they live in Natural Reserve, they have become increasingly uncertain about where they are allowed to work. The Community Association of Watu Ata began negotiating with the forestry ministry, and other parties over community access to the nature reserve. They also began developing conservation management strategies that incorporated the needs of the locals with the preservation of the forest.

A center for coffee production

Located on the slopes of Inerie Mountain on the island of Flores in Indonesia, farmers in Bajawa district and neighboring Golewa have practiced sustainable agroforestry for generations, producing coffee for export to the U.S. and Europe known as Arabica Flores Bajawa (AFB). Although not as well-known as other specialty coffees in Indonesia, its popularity is increasing, and Ngada regency now produces more than 300 tons of AFB per harvest.

By all accounts, Bajawa district should be the center of coffee production in the area. However, as land regulations have shifted over time, farmers have become increasingly uncertain about where they are allowed to work. Over the years, they have lost access to crops that their families had traditionally harvested—long before there was any concept of government land-use designations.

When, in 1932 the Dutch government designated 5,400 hectares of Inerie mountain as protected forest, residents were still allowed to manage the land as they had traditionally done: planting small half-acre plots of shade-grown coffee, vanilla, chocolate and vegetables throughout the forest.

However, in 1983, the Indonesia Department of Forestry designated the area a protected forest, and in 1992 passed a ministerial decree designating 4,298 hectares of the area as a Nature Reserve. With this switch, some 15,000 people who live on the edge of the reserve were suddenly denied access to the coffee farms they depended upon for their livelihoods. Many were driven out, but some chose to continue to work the land, claiming customary rights to the forest.

Tensions between the Natural Resources Conservation Department (BKSDA) and the locals exploded in 1999/2000 when the BKSDA rangers began burning field-huts belonging to “illegal” farmers. Conflicts rapidly became widespread and increasingly nasty. Desperate for fair treatment, one group of farmers formed an organization to advocate and petition for their rights, with the help of local NGOs. 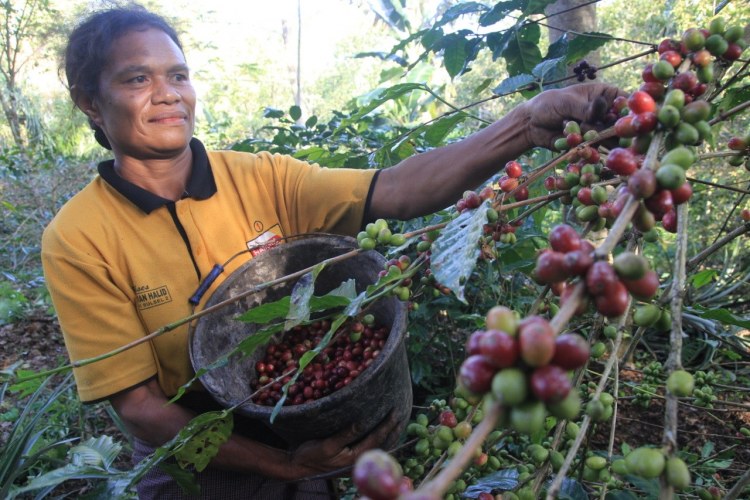 That group, now called the Community Association of Watu Ata (Permata), began negotiating with BKSDA, the forestry ministry, and other parties over community access to the nature reserve. Permata also began developing conservation management strategies that incorporated the needs of the locals with the preservation of the forest.

"Permata believes that the two principles governing farming in and around the protected area must be a sustainable forest and sustainable economy," said Rikardus Muga, Permata program coordinator.

With the help of Permata, in 2010 members from nine villages in the Watu Ata region agreed to take an oath to sustainably manage the forest based on mutually agreed upon principles. During an elaborate ceremony on a hilltop, they sacrificed a buffalo and recited the oath aloud before their god, ancestors and fellow human beings.

In part, the oath stated: nobody may clear the forest in the core forest areas (zones of old growth and sensitive areas containing springs), or clear areas they do not intend to cultivate. Nor may any resident burn the forest in Watu Ata. Members agreed to neither buy nor sell land in the community forest, and promised to neither kill nor capture protected animals. In addition, they all agreed they would not harvest from another person's garden without consent. Each offense carries a fine of '”kaba mosa baka zua” (a buffalo horn over 45 centimeters long, and 400 kilograms of rice) or “tua bhara pud’a zua” (60 liters of palm wine and provide food to all of the people of the nine villages.)

"The residents feel more obligated to follow the customary laws than they do the formal state law," said Rikardus. He believes this is because under customary law, farmers are able to maintain both the forest and their source of income.

Community engagement has been largely successful as the local government has seen that working with the public is more effective than regulating them. BKSDA now regularly enlists the help of members of the group to patrol the Watu Ata area, ensuring that everyone is treated fairly, and that unnecessary conflicts are avoided.