Climate geeks and poison sprayers: it's time to really listen to each other

Climate geeks and poison sprayers: it's time to really listen to each other

"If that new fertiliser action plan goes through like this, it's the end of the story for me." Boom. I taste the mix of upset and anger in the voice of Lorenzo, a young farmer. "Not being allowed to use so much land, it's just no longer profitable."

Just prior to our conversation in December 2022, a proposal for a new Fertiliser Action Plan in Flanders, Belgium (MAP7) leaks out. This will determine, among other things, how much and where farmers can use fertiliser. Where does the leak come from? Is this really what is to come? Will there be any adjustments? Many questions, and the result so far: a spectacle on Twitter and in TV studios. Stress and uncertainty among those bearing the consequences.

I slump down discouraged. Agriculture and food are at the crossroads of the greatest challenges of our time: climate, environment, poverty... But the way the discussion is being conducted does not reflect that. I see big positions with increasingly sharp caricatures. At one extreme, the "poison-spraying farmer" who doesn't want to know about change. At the other extreme, the "climate geeks and environmental terrorists" are on a mission to destroy agriculture.

But this evening tempers my misanthropy. We are hosted at the Gansbeke family's dairy farm in Lokeren, Belgium. Eight young farmers and eight students from different study backgrounds are present, at the invitation of Rikolto and Groene Kring, the association of young farmers and horticulturists. Together, we worked out a dialogue concept to break through the polarisation in the food debate. 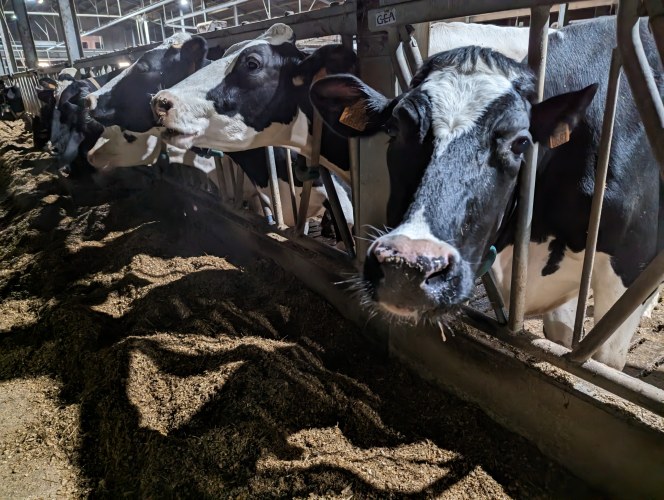 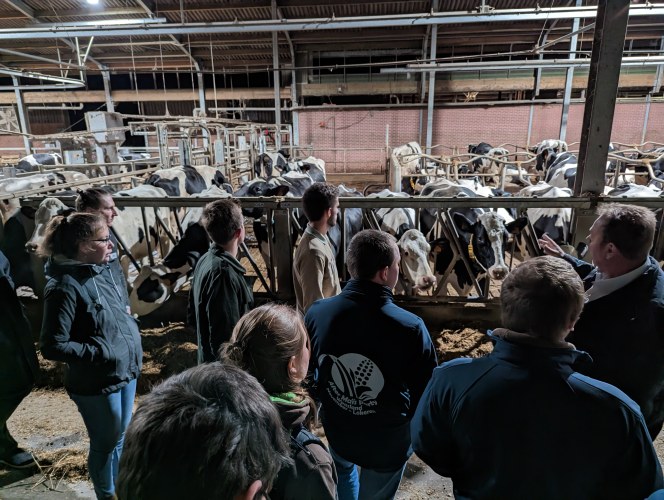 Why do I think what I think?

Lorenzo and I form one of the discussion duos. We take out the sheet of statements and tick whether we are more likely to agree or disagree: large-scale livestock farming and animal welfare do not go together. Chemical pesticides are an ecological disaster and should be banned by law. Short chain should become the norm. We need bigger and more efficient farms in Flanders.

At that last statement, we linger. I tick "disagree", Lorenzo "agree". We take out the instruction sheet, because this is not a classic debate to convince each other. This is a conversation where you take turns to explain your position, walk briefly in the shoes of your discussion partner, discover why they think the way they do.

I explain my concerns around scaling up. How I fear that human scale will be exceeded and alienation will occur. You see this in so many businesses that grow, merge and get bigger again. I fear that the drive for scale and accompanying efficiency in agriculture leads to impoverished monoculture. I fear that large farms need so much capital that soon only big investors will be active in agriculture. Institutions that are far from the land and only look at returns in spreadsheets. Who see the farmer as an expendable pawn. Who are not accountable to the environment and society.

Lorenzo nods. That is not the future he wants for himself and his fellow farmers either. Still, he disagrees. 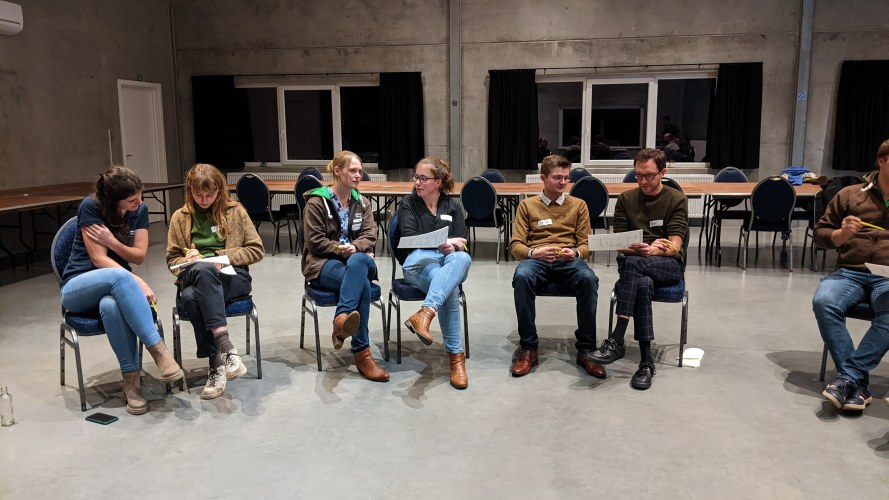 Me and Lorenzo, my discussion duo that evening 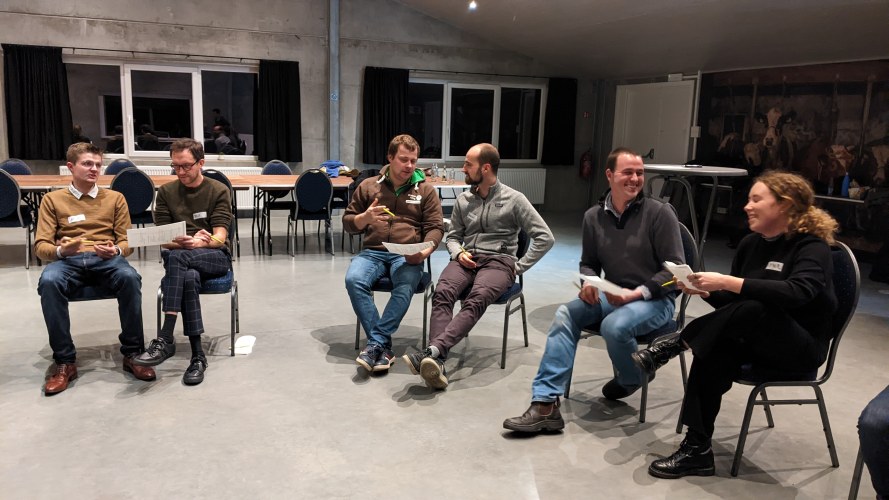 There were many other discussion duos in the room 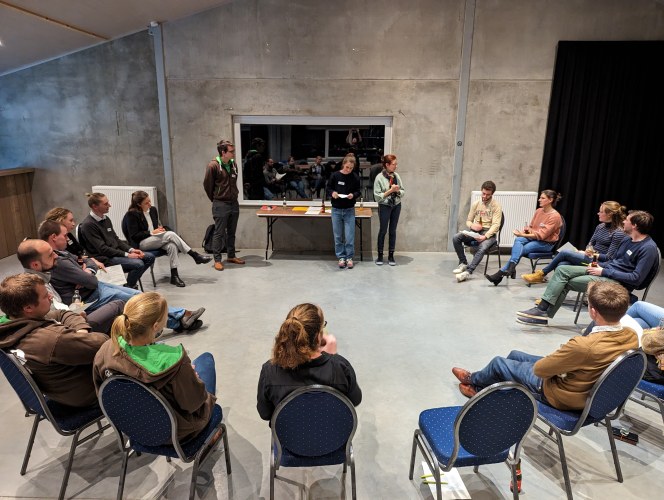 This was not a debate, rather we listened attentively to each other

'For me, it's a matter of free entrepreneurship,' Lorenzo tells me. 'If I see a new opportunity to grow, I want the freedom to be able to do that. That's just in me. I want to move forward. Of course, I have to take care of my environment and I don't want things to grow over my head either. I would be crazy, indeed. But as long as I agree with other farmers around me to ensure diversity, why not?

Where I see the drive for efficiency clashing with concern for the environment, Lorenzo sees it differently. Efficient use of soil and water means saving the environment. People think we just spray all over the place with fertiliser and crop protection products, but we do it very precisely and GPS-controlled. The less, the better for the environment and for my wallet, because those things cost a lot of money.' For Lorenzo, the right technology is a tool to help him keep control of his farm as a farmer. "That way I get more done with my labour," he says.

Surprising. So we disagree, but we understand each other. Strange how we interpreted that notion of scale and efficiency completely differently. Strange how we nevertheless have exactly the same concerns. 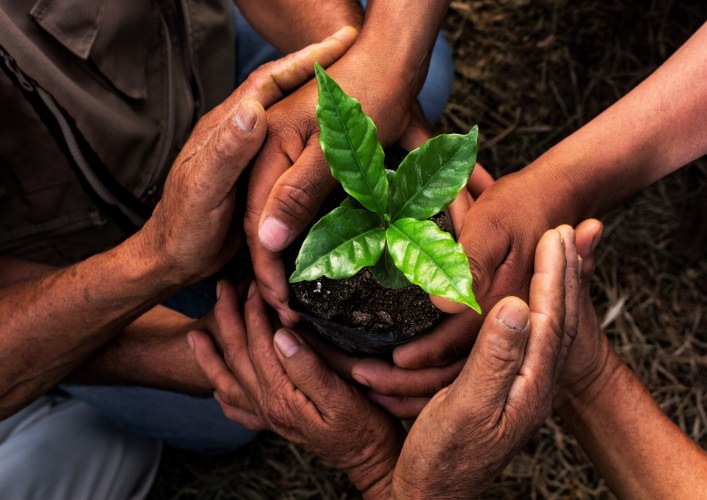 A sustainable income for farmers and nutritious, affordable food for everyone - this is our vision and mission.

At Rikolto, we reach our goals by building bridges between smallholder farmer organisations, companies, authorities and other actors across rural and urban areas.

Download the MSP toolkit available in English, French and Spanish.

Change as a constant

The conversation plays in my head for a long time. Globally, farmers like Lorenzo face huge challenges to be future-proof. Emit fewer greenhouse gases, face fiercer rains and longer periods of drought, meet nitrogen and other standards, and so on. Is that possible?

Agriculture has reinvented itself several times in the post-war period. The Gansbeke family farm is the best proof of this. Fuelled by the entrepreneurial drive of several generations, new (European) legislation, changing market conditions and technological developments, land was bought, sold and merged; new crops were tried out, new stables built for livestock, and other sideline activities developed.

Farmers don't want to change? History proves: they have never done otherwise. I met farmers that evening who know full well what is moving in the world. Justine, another participant, put it on point: 'I have to decide whether to take over the pig farm at home. That's an investment for 40 years, but who says people will still be eating pork in 20 years?'

This is what we, outsiders, underestimate. Making long-term investments in a world that changes rapidly limits your room for manoeuvre.

"How quickly change is possible, is something we help determine as a society by creating a workable framework. 'Politics is the art of the achievable', it then echoes, often combined with the slogan 'achievable and affordable'. Two shams to drown out too much ambition. What is feasible and affordable is up to us. How much space do we give to politics to pursue ambitious goals? How much space does the policy give to farmers to venture in the desired direction? What breathing space do supermarkets and food companies give by doing business with a long term perspective? And how much space do we as consumers give?"

Difficult, but not impossible questions. Making that space is also the mission of a civil society organisation like ours. And it starts with dialogue. So that's why we persevere with it. Less debates, more real conversations.

Want to know more or have some questions?