in News
Healthy and sustainable food for Indonesian cities
This news is part of the following focus area:

Indonesia will soon be one of the most urbanised countries worldwide. From 2010 to 2012, the urban population increased from 49.8% to 54% of the total population (237.6 million). With this growing trend, it is predicted that 65% of Indonesians will live in cities by 2025. One of the major questions in response to this growth is how will cities fulfil these people’s right to food? To answer this, we need to fix the problem in our current food system, in other words, the lack of food.

There are many challenges in ensuring access to safe, healthy and affordable food for all Indonesians. Indonesian statistics (2019) show that paddy field areas have decreased by 9% in the past five years because of land conversion. The impact of climate change has also affected crop production and farmers’ livelihoods. Even if we manage to stimulate food production to outpace population growth, there are still problems such as unequal food distribution, unsustainable food production and consumption practices, and the enormous amount of edible food wasted, creating problems.

The severity of these problems has inspired some of the world’s cities to create and foster more sustainable practices. Several practices are already underway, such as growing and producing healthy food, minimising food loss and making use of edible food waste and composting waste, leading to the development of the Food Smart City initiative.

In Indonesia, the Food Smart City initiative is a collective effort by Rikolto, Gita Pertiwi Foundation, Perkumpulan Indonesia Berseru, and the Indonesian Consumers Group (YLKI). To document current sustainable practices in Solo, one of the food smart pilot cities, Rikolto carried out a Communication Learning Cycle, from 9th – 12th July 2019. Here are some stories from the field.

In Solo City in Central Java, a group of passionate citizens and hoteliers are taking a sustainable step to reduce food waste, while helping people connect with each other better. Mooryati (63), a catering firm owner, is one of them. As a cook, she is no stranger to an early morning frenzy in her kitchen. She has been awake from 3 a.m. to cook and make sure that all dishes are ready to be packed into 100 rice packets wrapped in banana leaves. It is a food-sharing day. 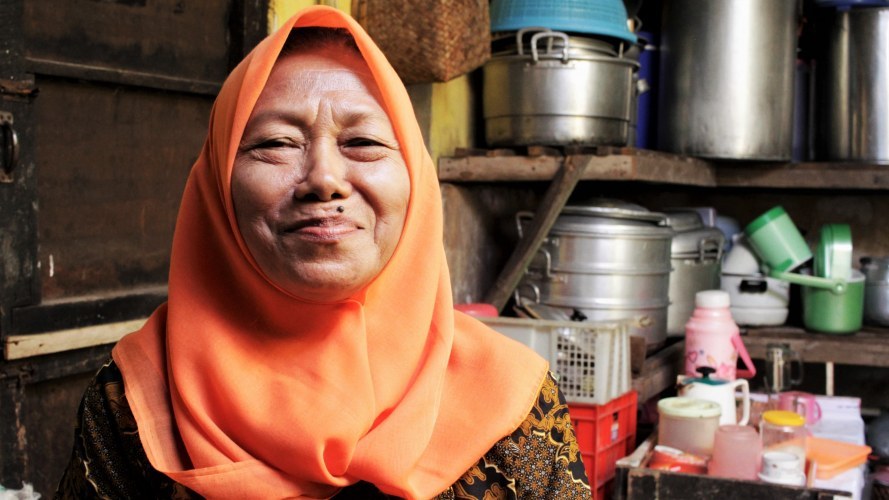 “All of the food is donated and we have to make sure that we cook it properly and that the meal we serve is nutritious. Nutritious food consists of a balanced portion of vegetables, protein and enough carbohydrate. Today, we will prepare rice, vegetables and fried chicken marinated overnight”

Mooryati chairs the Healthy Food Consumers Group of Surakarta (Konpasera), a group receiving training on food safety and healthy cooking techniques from Gita Pertiwi, Rikolto’s partner in the Food Smart City initiative. Konpasera was founded in 2010, as part of Rikolto’s (previously VECO) healthy food consumer awareness initiative. Its role in the food-sharing activity is cooking and processing donated food ingredients. For today’s event, they get 20 chickens from a chicken breeder and 10 kg of white rice from the donors.

The rice packets will be distributed to elderly people in Tipes, a government-designated “gender-responsive” village. The group is one of Solo’s most vulnerable populations affected by the limited, uncertain availability of nutritionally adequate and safe food. Joining with Konpasera is a group of young people under the name of Kalacanda, who volunteer to distribute the meals to the elderly. 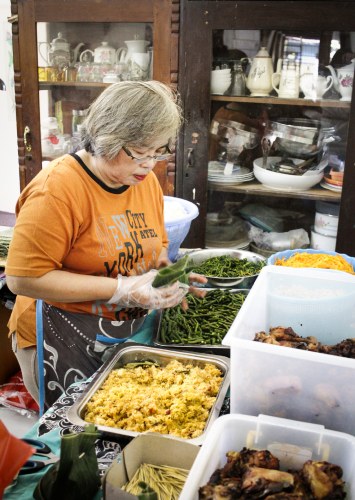 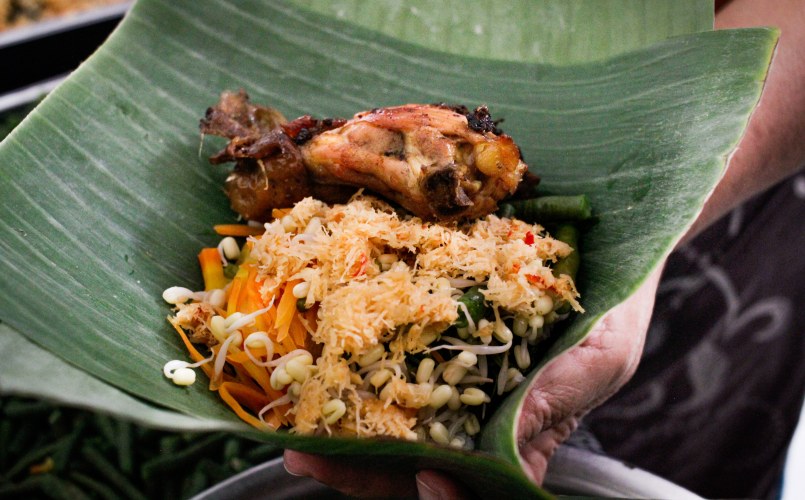 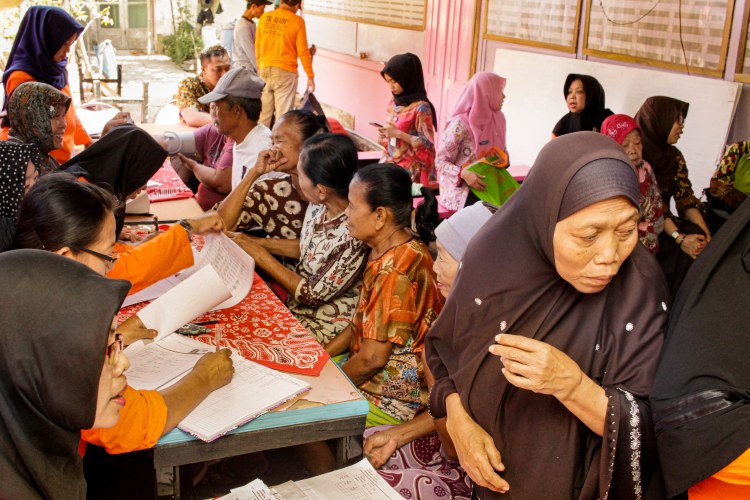 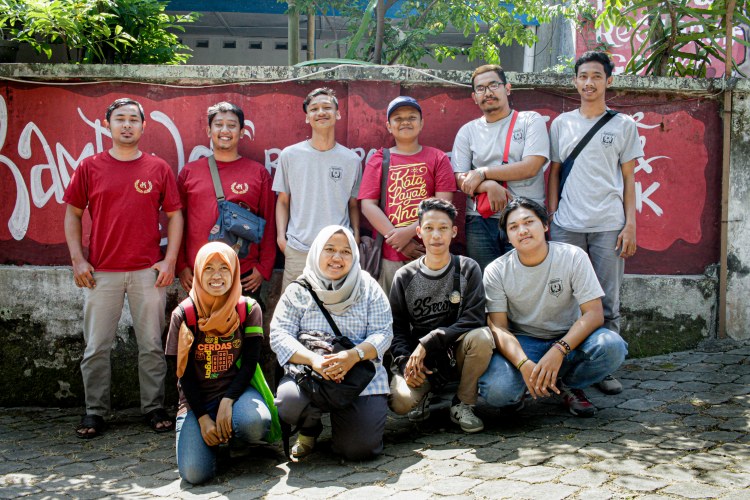 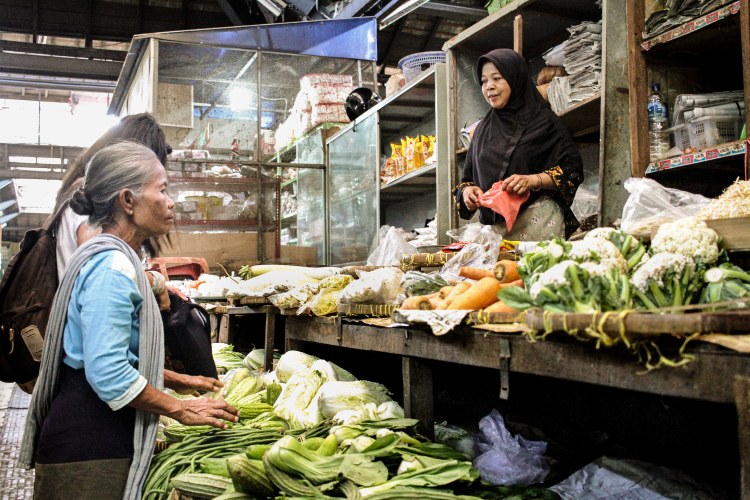 The food-sharing activity coincides with regular health check-ups for the elderly at Poslansia (a health centre for senior citizens) in Tipes. On site, dozens of senior citizens are waiting in line. The health examination starts with a weight check, blood pressure check, and blood sugar check. After the examination, volunteers from Kalacanda give a meal package to the elderly.

One of the elderly people is Bobby Wayong (62) who sits quietly while watching as the wrapped meals are passed from a young man’s hands to an old man’s wrinkled hands. He is also the head of Poslansia. He says that his main concern is the elderly people’s lack of awareness about a healthy diet and lifestyle.

“As we can see today, elderly people are prone to illness. That is why we need to routinely check our health. Another important thing is to make sure that we consume nutritious food. In reality, the elderly don’t eat well because they can’t afford to buy food and they don’t have enough information about what is good for them”

The idea to collect excess food from suppliers and individuals and redistribute it to low-income residents, care homes, and orphanages has been taking root in many global cities’ efforts to reduce food waste, including in Solo. Through the Food Smart City initiative, Rikolto and Gita Pertiwi approach city governments, local communities, civil society organisations, supermarkets, hotels, restaurants, and catering firms to redistribute excess produce in their network. 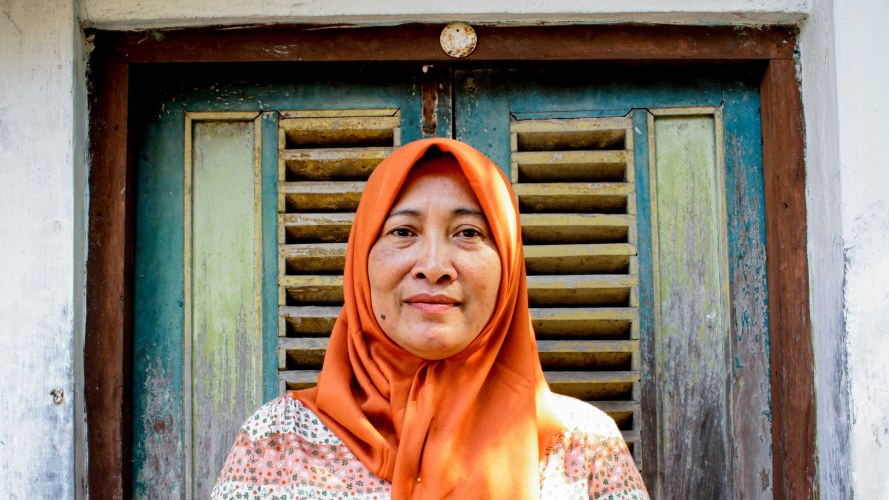 Titik Eka Sasanti, the Director of Gita Pertiwi Foundation says that food sharing offers a solution to tackle the two-fold issue of food waste and food access. She pinpoints palpable problems and challenges in Solo underlying the activity.

“Solo is a culinary city that doesn’t produce and grow its own food. The city is dependent on other neighbouring districts for food supplies. Around 500,000 people live in Solo and 11 percent of them live below the poverty line, earning less than one million Rupiah (64 Euros) per month. This low-income group has limited access to food, especially nutritious food. Solo has an important duty to fulfil its people’s right to food”

Solo is also a tourism city with sprawling new hotels and restaurants and catering firms that generate food waste. Every day, the city produces 300 tons of waste; 62% is organic waste, including food waste.

With the aforementioned challenges, steps are taken involving all food stakeholders. The first step is to encourage food producers and suppliers to donate excess food. Drastiana Nisa, Project Officer at Gita Pertiwi says that her organisation has developed a network of rice producers and chicken breeders, and individuals willing to donate. “Food producers can prevent food waste by donating unwanted food products. For example, we received some chickens whose weight didn’t meet sales requirements, so the breeders donated them. We also got broken rice that actually still has nutritional value. We can still process the food to make edible and nutritious meals,” she says.

The next step is to ensure that food is safe and healthy to consume. In doing so, Gita Pertiwi involves consumers group such as Konpasera and women’s groups as to process food. These women have received training in general nutrition, food safety, selection and cooking skills. Another group being mobilised is young people — as food distributors. 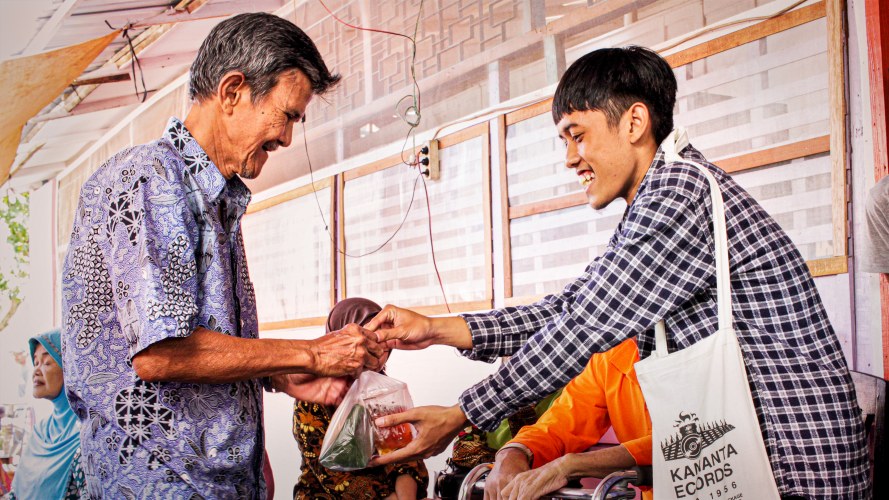 One of the most active food-sharing proponents is Ajhi Wicaksono (28), a member of Kalacanda, a neighbourhood youth organisation. With his peers, he collects donations from the local residents and uses the money to buy food ingredients that the women’s group will cook. “Every Friday night at 10 p.m., we distribute meals to homeless people and rickshaw drivers on the street. We name the activity ‘Blessed Friday’, because we want to share blessings with less fortunate people,” he says. At that time, Ajhi was also involved in a Warung Murah (cheap food stall) community, which sells a meal package for Rp 2,000 (0.2 Euro) — almost 86% cheaper than meals at other stalls.

“We call them episodes because we film every episode and share it with our network. A lot of people from outside Solo have contacted me after watching the video and they want to join or do the same thing in their city. This is a good start; we want to make this viral and spread the food-sharing virus”

Meanwhile the hotel industry, as one of the sectors contributing to food waste, is starting to take its waste management policies seriously. Hotel Indah Palace, a three-star boutique hotel in Solo is an example. 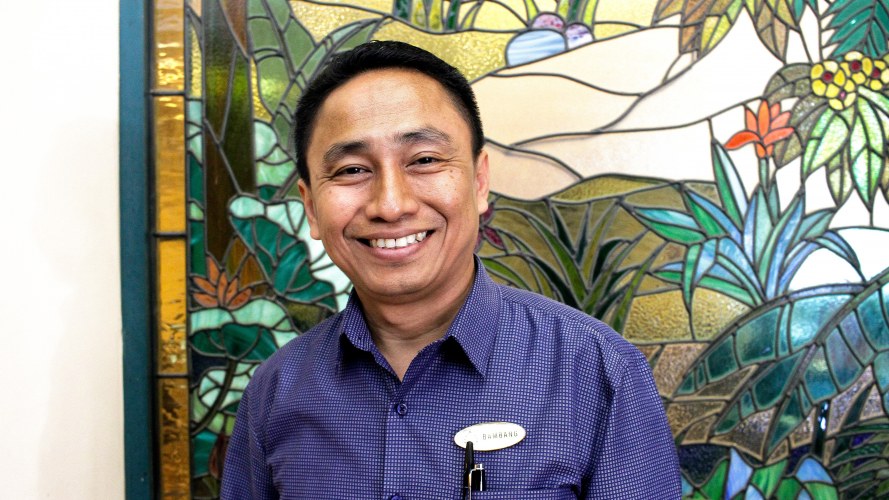 “Since 2013, we have tried to prevent food waste by minimising food stock, to avoid disposing of expired food. We also encourage our guests to order food based on stock availability, so we don’t have to stock more. Another strategy is to cook enough food for only 80% of the guests”

Sometimes there is still excess food that can still be repurposed and distributed. “If the food is edible, we will upcycle it, turn it into another dish or give it to our staff. During an event at the hotel, we ask our guests to take home excess food. As for inedible food waste, it can be used for pig feed,” Bambang adds.

Bambang states that hotel management adopts these practices for economic and environmental reasons. “The hospitality industry in Solo is highly competitive and we need to find a way to survive, one of which is by cutting costs. By managing food waste, we can reduce our operation costs by 25%. We also think that reducing food waste is an environment-friendly practice in which more hotels should follow suit,” he says.

The stories from Solo show that food waste management practices can take on many shapes and be carried out by anyone. Current practices can serve many purposes by combining a social purpose with the fight to tackle food and environment problems. Moving ahead, Gita Pertiwi and all its stakeholders are going to draft a Standard Operating Procedure (SOP) to provide guidelines for food producers, processors and distributors involved in food-sharing activities.

The SOP will clearly state the food safety and nutrition practices to be followed by all stakeholders. In addition, a platform called Carefood will be established to bring together food-sharing communities and the Surakarta Children’s Forum. Having the SOP and Carefood platform in place will strengthen interconnectivity between food stakeholders to ensure access to safe and healthy food for the most vulnerable groups in the society