Case study: Promotion of the rice value chain in Benin

Case study: Promotion of the rice value chain in Benin

Rice is becoming increasingly important in Benin. A luxury commodity until a few years ago, it is now becoming a daily staple food for a large part of the population. With this increasing popularity and a rapid decline in income from growing cotton, the area devoted to growing rice has more than doubled over the last 15 years, and total output has increased nearly five-fold. Rice is now Benin’s third most important crop, after sorghum and maize. Benin now produces over 34% of the rice it consumes, and has the capacity to grow and become a net rice exporter to neighbouring countries. A case study on the cooperation between Beninese farmers’ organisations, the Belgian retailer Colruyt Group and Vredeseilanden/VECO (now Rikolto).

Agricultural production in Benin faces deep internal and external challenges. The country’s agricultural sector is characterized by a lack of mechanisation, deficient water control, unavailability of agricultural inputs at the right time, a weak system for the transfer of technological innovation, insecure land tenure, insufficient technical support, lack of transport and storage infrastructure, organizational deficiencies and an almost complete absence of agricultural financing. External challenges for rice farmers come in the form of massive cheap rice imports from Asia and particularly food aid from Japan. These imports translate as subsidized and decidedly unfair competition.

Vredeseilanden/VECO started the rice programme in 2002 to boost the capacities of farmers and their organisations to produce high quality rice that can successfully compete with imported Asian rice on the domestic market, and eventually enter the export market. The central goal is to increase farmers' incomes through improved cultivation and access to modern, dynamic markets. Stimulating local production and deployment of an effective local value chain will also help cope with future food crises. The programme has resulted in significant outcomes, including local self-sufficiency for households in the Collines, a 50% increase in per hectare productivity, professionalized farmers’ organisations that have developed the ability to export, and international Fair Trade certification, and a positive relationship forged between producers and the Belgian supermarket chain, Colruyt.

Browse through the full case study with videolinks: 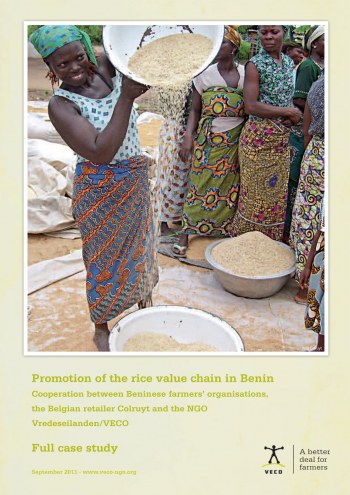