As part of their sustainability efforts, Belgian supermarket chain Colruyt has started up a pilot project in Peru with the help of Vredeseilanden (VECO). Colruyt already started investing in sustainability with the set up of its green line 20 years ago. After investments in energy-efficiency of their supermarket infrastructure, distribution system etc., they started focusing on sustainable sourcing. Colruyt and VECO have engaged in a long-term collaboration to create sustainable agricultural chains, with a focus on the ‘inclusion of smallholder farmers’. A first product they worked with was rice from Benin. Now, asparagus from Peru was chosen for a new pilot that focuses on inclusive modern markets. Peru is the second largest producer and exporter of asparagus worldwide. Even though small-scale producers largely outnumber the few large exporting companies, small-scale farmers only account for 6% of the export value in the sector.

Scana Noliko, one of Colruyt’s providers of canned goods, imports canned asparagus from Peru. They were identified as a partner in the inclusive canned asparagus and organized a field trip to Peru in September 2011 to find an exporter and farmer organization they could work with. Gandules, one of the most important Peruvian agribusiness companies, was chosen as exporter and REOPA, an association of small-scale farmers in the Peruvian region of La Libertad, as farmer organization. The pilot project would thus be a multistakeholder project in which VECO had a facilitating role, enabling interaction between the 4 partners.

The first delivery from REOPA to Gandules was planned from half January to March 2012. At first the supply of produce to Gandules did not cause any difficulties. After a couple of months, however, delivery slowed down because of a discussion on drawback and insufficient communication. VECO therefore evaluated the project with the LINK methodology (a toolkit developed to build inclusive and sustainable trading relationships linking small-scale farmers to modern markets) and was thus able to determine the following remaining challenges for all actors: establishing price references, setting up fluent communication between the actors, increasing trust between the partners, guaranteeing continuity and responding to quality demands. Ecological issues, such as water use for irrigation, are at stake too and the labor conditions still present challenges as well.

Meanwhile, there are also great achievements: REOPA’s canned asparagus has found its way to Colruyt, generating a surplus value to their production of asparagus that is not suited for the fresh market. Furthermore, the analysis made by VECO has provided a clear image of the functioning of the chain and the production, processing and marketing of asparagus by REOPA. All partners have expressed their wish to continue the pilot project in 2013 with the support of VECO. In addition, Colruyt will identify new key private label products to work on inclusiveness for small farmers in the next couple of years. At this point, it will also be very important to share all the experiences from this pilot with other partners and spread the lessons learned to other companies and NGO’s interested in including smallholders into their product chains. 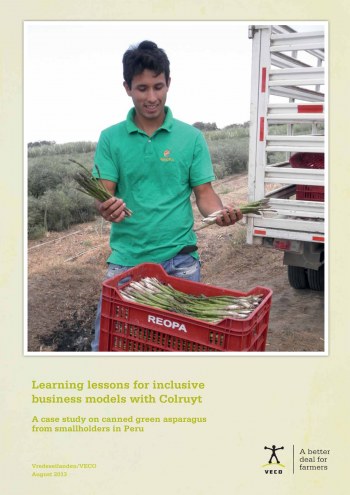