Following the example of fair trade with the South, can we also apply the fair trade principles in Belgium? That was what we – representatives of NGOs and of the different links in the (organic) food chain - reflected on, freely and frankly, at Johan Broekx’ dairy farm. The inspiration came from the fair organic milk Biodia, which guarantees a fair income to the farmer thanks to a unique price calculation.

At the occasion of the Fair Trade Week, Max Havelaar, Vredeseilanden, Biosano and Biomelk Vlaanderen invited progressive thinkers and doers to exchange ideas around a local application of fair trade. Host in charge was Johan Broekx, organic farmer in Bocholt and president of the cooperative Biomelk Vlaanderen, which unites almost all organic dairy farmers in our region. Today, a small fraction of the seven million litres of milk they produce is marketed as Biodia-milk by Biosano, a wholesaler in organic foods. With this ‘fair local organic milk’, Biosano and Biomelk Vlaanderen work on better future prospects for the Flemish farmers.

“In recent years, the total production value of dairy farming has become more fluctuating due to a higher price volatility in milk and raw materials bought by the farmer”, says Dirk van Gijseghem from the Department of Agriculture and Fishery. Today, our farmers are (partly) dependent on subsidies for their income, which is “not a healthy situation” according to Gert Engelen from Vredeseilanden. It is also not entirely consistent with the principles of fair trade. “Fair trade stands for trade, not aid”, endorses Lily Deforce of Max Havelaar, the hallmark for fair trade products. “In the South we help farmers to climb out of poverty themselves instead of making them dependent on aid.”

For cocoa with the Max Havelaar label, that means concretely that the fair trade price follows the market price, however it does not decrease below a previously established minimum price that still guarantees the farmers an income. Today, cocoa, bananas and other fair trade products are produced in 70 countries in the South, and they are available in every Western country. Also in our own country the primary producers (and the other links in the food chain) yearn for a fair compensation for their work. In the usual chain this often goes wrong, especially with the first link. Farmers feel they are the play-ball of distribution and some of them therefore draw an income from the short chain.

Stijn Smet of Innovation Support found even more trade forms that award high priority to economic sustainability. The Ferme du Sart supermarkets in the North of France and d’ici in Namur strongly focus on local purchase of their food products and a lasting relationship with their suppliers. DistriKempen is a logistical cooperation between five farmers who get their farm products to more farm shops and at Delhaize by common transportation. Partly thanks to the support of Innovation Support during the negotiations, the supermarkets chain agreed to a minimum margin for the farmers. An entire sub-sector had to benefit from the beef price index, as the chain starts negotiations if the relation between beef cattle and food prices limps.

Biodia-milk definitely fits in that economic sustainability story. “By stepping into this project the organic farmers of Biomelk Vlaanderen invest in a viable future for their business, because we consider the price of organic milk too tight. We strive for a basic price for organic milk of 45 cent or more”, says cooperative president and dairy farmer Johan Broekx. According to Broekx, farmers in their business continuously strive to deliver a “saleable product”, however they are too little occupied with selling. He intends to stand firm more often so that products can leave the farm at their true price, “although it is not easy, because agricultural products are perishable”. “With Biodia we start from the cost of the farmer and add a fair profit margin to it”, says Lode Speleers from Biosano. That margin consists in a compensation for labour and extra financial breathing space that allows investing in the business. The specifications for this fair milk were developed by Vredeseilanden, and can be considered as an add-on to the specifications for organics. Vredeseilanden itself calls it a “meritorious intent to apply the principles of fair trade here”. In order to determine a fair price for this fair milk, consultant Wim Govaerts elaborated a model farm that reflects the average business condition of the organic dairy farmers’ cooperative’s members. Maximum twice a year the Biodia-price can be adapted to the cost of the milk production at the model farm. Govaerts also checks if the model farm does not divert from the real situations with Biomelk Vlaanderen’s dairy farmers. At the start in 2011, Biodia realized a producers’ price of 44.5 euro per 100 kilo of milk. That already rose to 45.1 euro, implying that this milk is doing about five euro better than other organic milk.

During the discussion that followed the company visit it was suggested that Biodia could stand as a model for the entire agro food chain. Biosana itself indicates that the idiosyncratic product today still struggles with the limitations of its small volume. “As a result, processing in dairy is expensive”, Speleers explains. The fact that an insufficiently big volume turns the consumer price undesirably high due to inefficient processing and logistics, is not only experienced by Biodia but with organic food and fair trade products in general. Johan Broekx (Biomelk Vlaanderen), Lily Deforce (Max Havelaar) and Lieve Vercauteren (BioForum) vouch that the margin percentage of the trade is a disadvantage for their products, which are more expensive than the usual ones. They therefore advocate for determining the margin in absolute figures. The scale problem with organic products was solved by Colruyt by selling certain organic products not only in Bioplanet shops but also in Colruyt itself. “That makes organic food accessible and helps us to increase the volume”, they say. The theorem that there is more need for transparency around the distribution of the margins in the agri-food chain enjoyed great acclaim. “We must get rid of the image that supermarkets make big profits on organic and fair-trade products. That is bad for our image, whereas we need the wholesalers because if you want to make the world more sustainable je have to become mainstream. With Wereldwinkels alone this will not happen.”, says Deforce. If her views on transparency find hearing, she wants to help explaining to supermarkets that smaller volumes mean higher expenses and thus also higher consumer prices. On the relations within the chain, Wim Govaerts mentioned: “Farmers will only be considered full-fledged trading partners if the primary sector is not weak and fragmented, and if farmers can envision their own costs and be competitive. At present, the farmer is coerced in the position of price-taker. He will have to learn to become tougher during negotiations with buyers. Farming enterprises feed on own equity however nobody – and also a family business cannot – can produce below production cost during ten years. The stretch goes out, businesses will call it quits, production will disappear and then the price will automatically go up.” In organic goat dairy farming, the implosion of the sector was not passively awaited. Today, a cooperative unites all Belgian and Dutch goat farmers. By negotiating together about the entire goat milk volume, they achieve an importantly better price than in the past. Instead of counting on consumer goodwill to pay more for food, Govaerts calls upon customers to better remunerate their farmers-suppliers. Customers must be aware that otherwise their supply will be compromised. “And don’t count on abroad, because if there is no more local production here, foreign suppliers will take advantage of that in their price.”

Also at Max Havelaar they are convinced that the sector should not fixate on the consumer. “Although half of our resources go to consumer actions, I do not believe in the consumer to turn the market more sustainable”, says Lily Deforce. “We will have to work on the supply side, with government support but especially through initiatives from all chain players.” Lieve Vercauteren from organic farmers’ organization BioForum announced that intensive chain consultation in the organic food chain will be on the agenda before year-end.

This is a translation of the report written by Wim Fobelets of Vilt - www.vilt.be 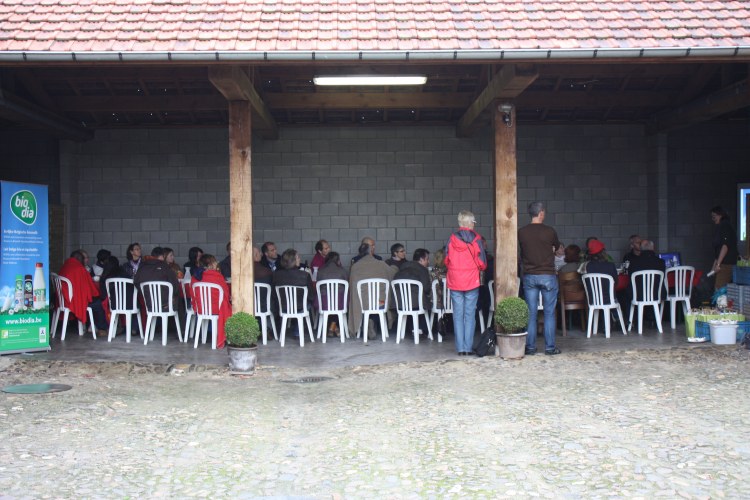