According to the FAO, 55 percent of the improvement in food security achieved in developing countries over the past decades is thanks to programmes that empower women. In our Generation Food programme in Ouagadougou, we explicitly encourage young female entrepreneurs to join the workshops and incubators. Bénédicte Marie Reine Kinda (27) is one of them.

Bénédicte takes on agriculture with a different approach. This young woman with a degree in human sciences is developing her agricultural business producing strawberries in transition to organic farming. "I interned at an organisation that promotes the cultivation and consumption of local organic products. I was positively influenced by the internship, and I created my agricultural business because of it. I wanted my own business to be organic to create a culture that respects nature and provides people with healthy food.” Generation Food supported Bénédicte in starting up her business.

The Generation Food Project in Ouagadougou

Ouagadougou, like other African capitals, has a predominantly young population. 67% of the population is under 25 years old. Although unemployment is high among young people, they show little interest in agriculture. Few engage in the agri-food sector and those who do often lack the support to realise their projects.

"The Generation Food incubator in Ouagadougou is a project financed by the Gillès Foundation, which has kindly made funds available to support new businesses in the agri-food sector in Ouagadougou”, says Mr. Hamado Tapsoba, Regional Director of Rikolto in West Africa.

Generation Food is set up by Rikolto in collaboration with the municipality of Ouagadougou for the benefit of young entrepreneurs. The project is supported by the private food sector and business coaches and contributes strongly to the capacity building of young people. It enables them to be actors in strengthening the food systems of their cities.

“I wanted to use everything I learned during the workshops”

"I was especially interested in all the topics related to organic farming and marketing in the workshops on agricultural production. I wanted to use everything I learned during the workshops to be able to run my plot in a better way.”

Bénédicte started her journey out of passion and was one of the 80 young entrepreneurs selected by the technical committee to join the programme, along with 49 other young women. They all took part in the incubation programme that lasted 6 months and were trained in 8 topics such as using the Business Model Canvas and crop production techniques.

The young woman has overcome difficulties just in time for the agricultural season of 2022. She couldn’t use her regular plot to cultivate because the borehole she used dried up during the dry season, and she needed water to produce.

At first, her parents were worried. In their eyes, Bénédicte gave up looking for a stable job in administration to dedicate herself to agriculture. However, they eventually came to terms and agreed to provide her with the necessary resources for her to rent a plot with a borehole for farming. During the growing season, she applied the recently mastered organic farming techniques to cultivate her strawberries and immediately saw the benefits of organic farming. 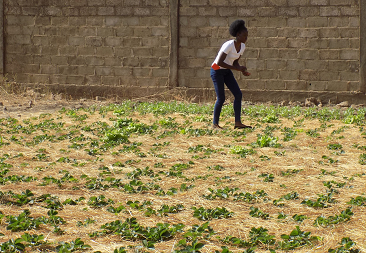 Bénedicte tends to her strawberries

Bénédicte: "The organic pesticides I use are repellent, whereas chemical pesticides not only kill pests, but also other types of insects that are useful for plants.” During the first harvest time, she grew more confident in the technique. She was able to harvest about fifty kilograms of strawberries and sold them to supermarkets, companies selling fresh organic products, processing companies, restaurants, individuals, etc.

"When I compare my current situation with my situation before I was selected for Generation Food, I see that I have grown, both economically and professionally.” Bénédicte continues: "My friends and the people that visit my farm encourage me to share my experience with others that would like to try out organic farming. It makes me feel talented and experienced. That’s why they encourage me to organise trainings.”

Young entrepreneurs on the road to success

Generation Food wants to help young entrepreneurs in their trajectory towards success by visiting inspiring companies, facilitating access to exhibitions, and continuing to offer the entrepreneurs opportunities to develop their businesses. The Generation Food Project Coordinator has created a WhatsApp group with all these entrepreneurs. Today, it has become an informal network platform for the agri-food sector.

"We will very soon launch two new competitions to select the fifteen entrepreneurs who have proposed the best business plans. The six winners of the first competition will receive funding and a second competition for nine winners will be organised. Those who have not been selected, will be linked with banks that have shown interest in Generation Food in Ouagadougou”

Bénédicte: “I am very grateful for the opportunity Generation Food has given me. The training courses helped me to realise my project. I had an idea, but I didn’t know how to structure it, how to turn it into reality without getting discouraged. Generation Food has supported me in developing that idea.” Bénédicte wishes to one day return to the plot she used to farm on and install a borehole there to pursue organic farming in the area.

Want to know more about our Generation Food programme in Ouagadougou?